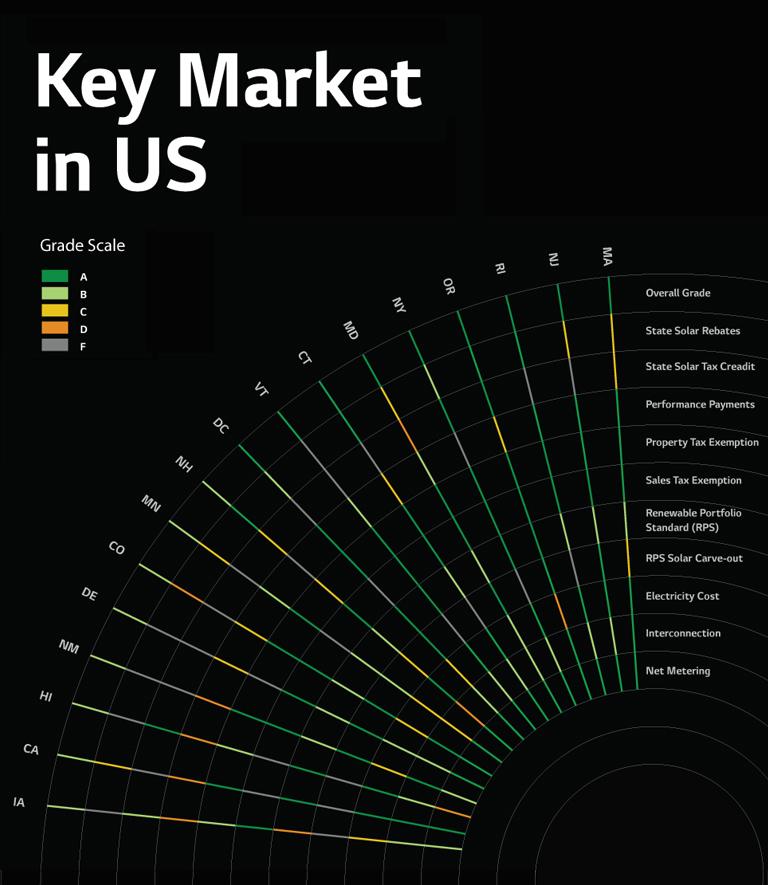 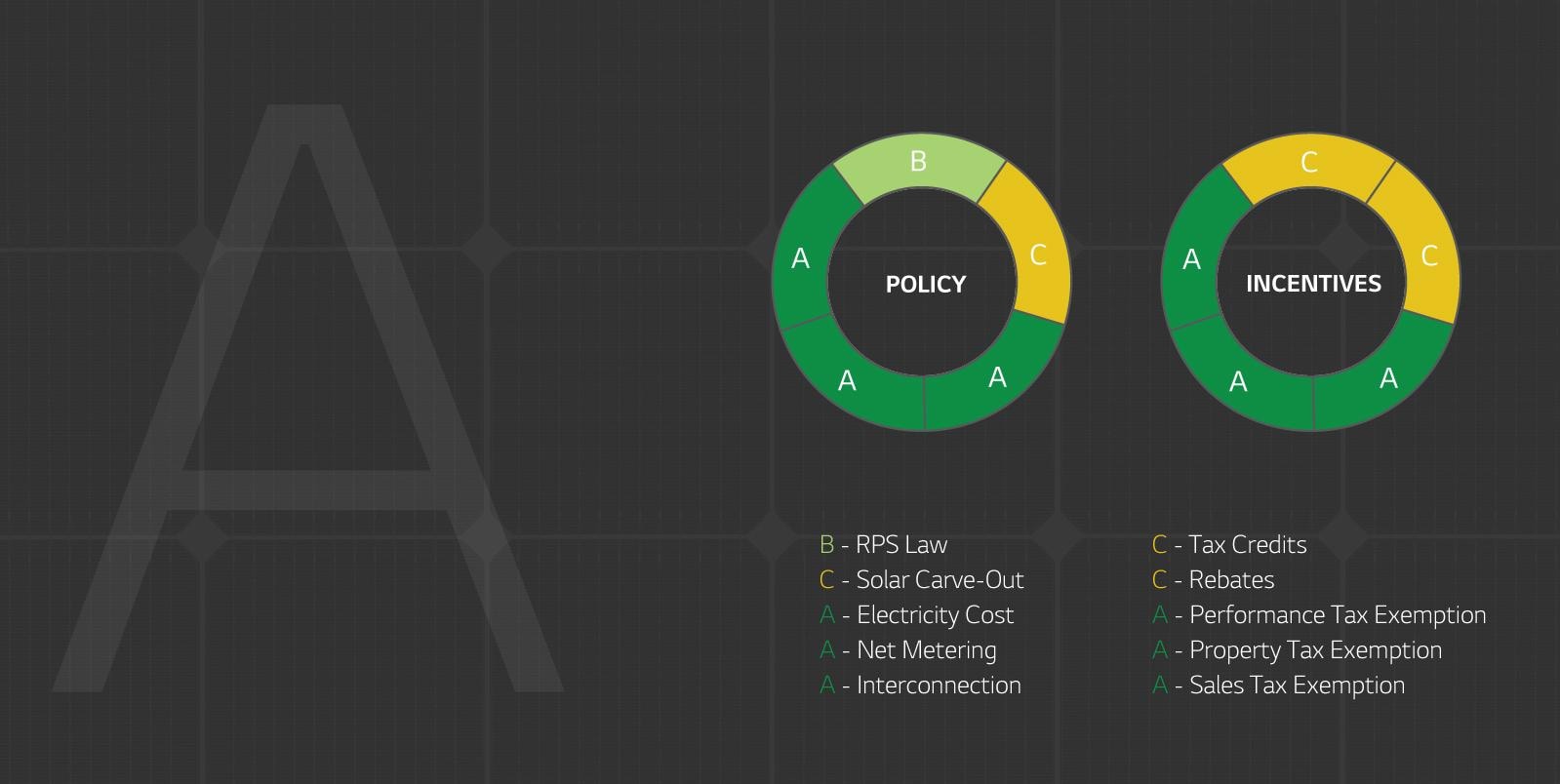 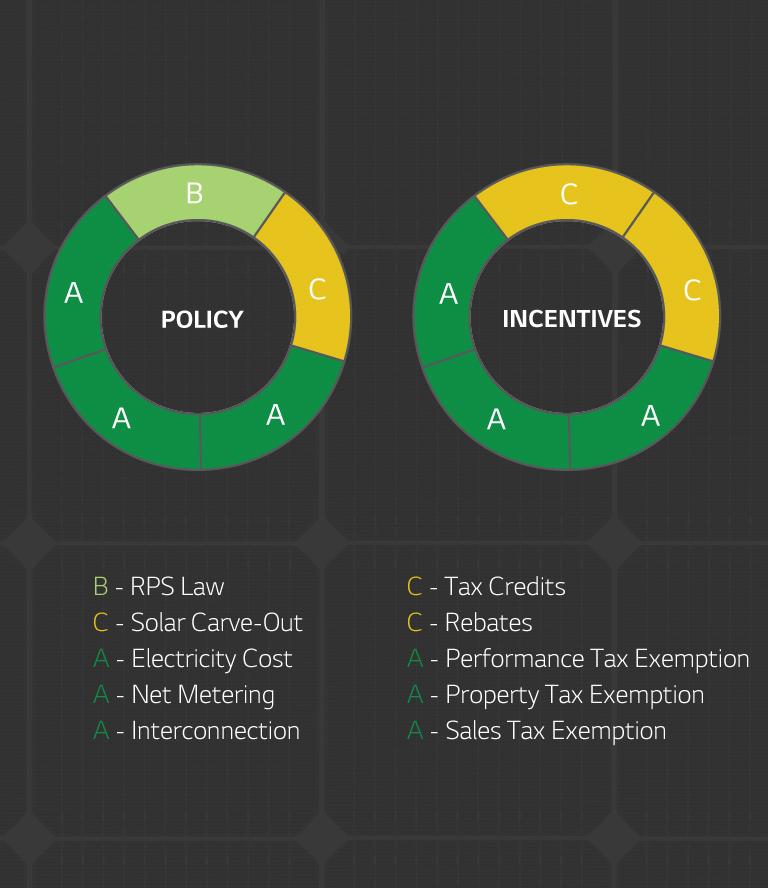 The state earned the top spot fair and square though, reinforcing its commitment to home solar owners with a new net metering bill in April, 2016. Overall, the state’s policies for solar are nearly as good as they can be, and while we’d like to see an updated RPS with a new solar carve-out, the Bay State is still the easiest state in which to get into solar. And that payback time is nuts. 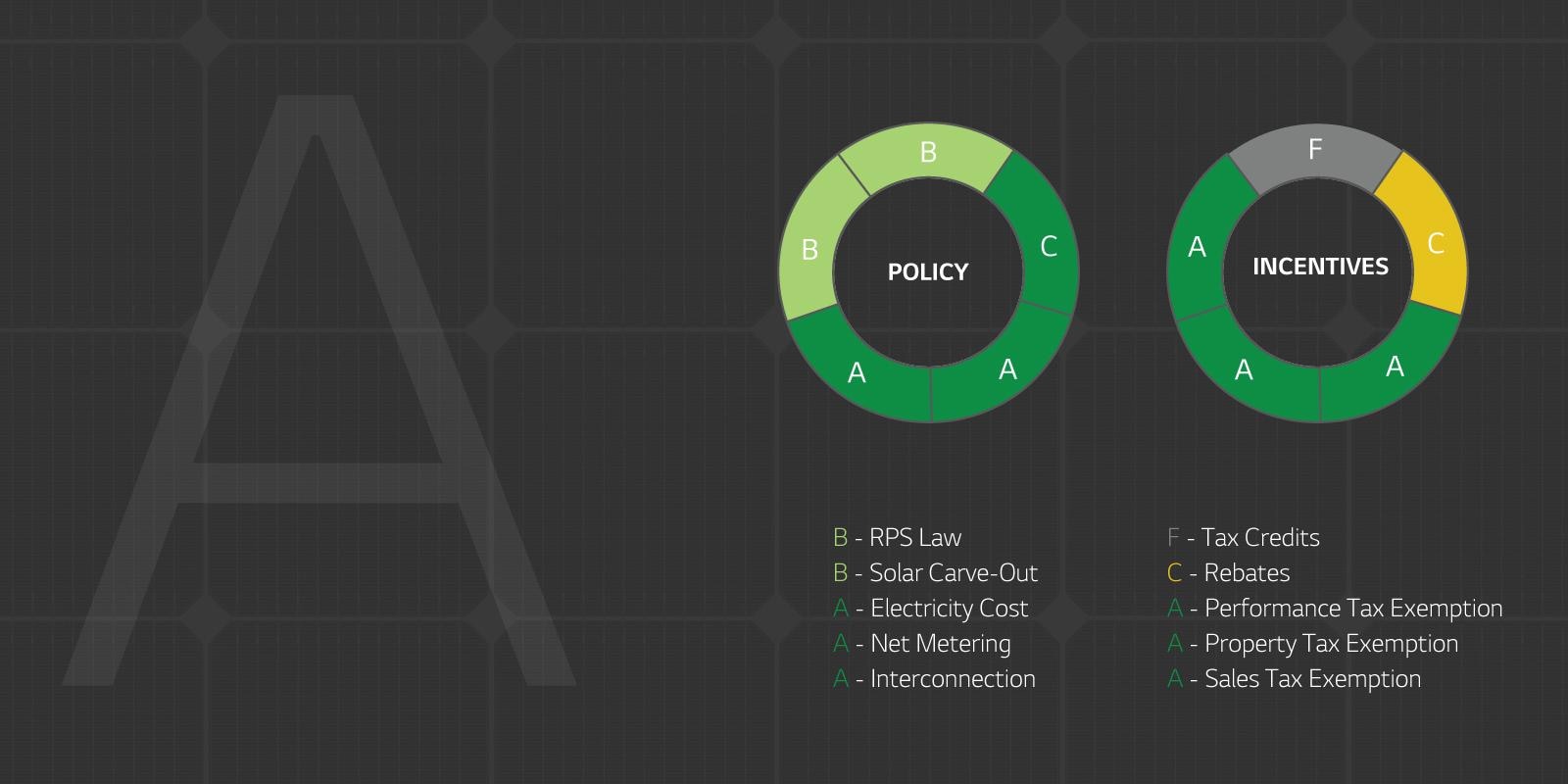 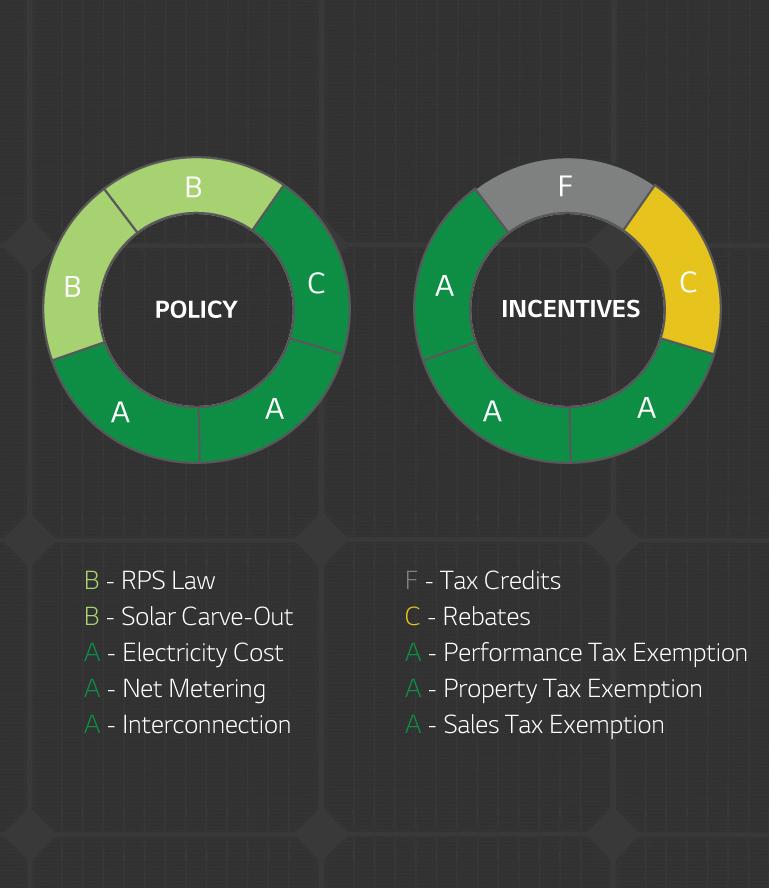 New Jersey gave up a share of the limelight this year to take 2nd, instead. Policy-wise, it’s every bit as good as Massachusetts, but doesn’t have quite the financial muscle to best the Bay State. NJ’s solar carve-out is still near the best in the nation, which has led to a very robust SREC market. With New Jersey’s great solar policy and incentives, you Garden Staters can feel secure in a solar investment. 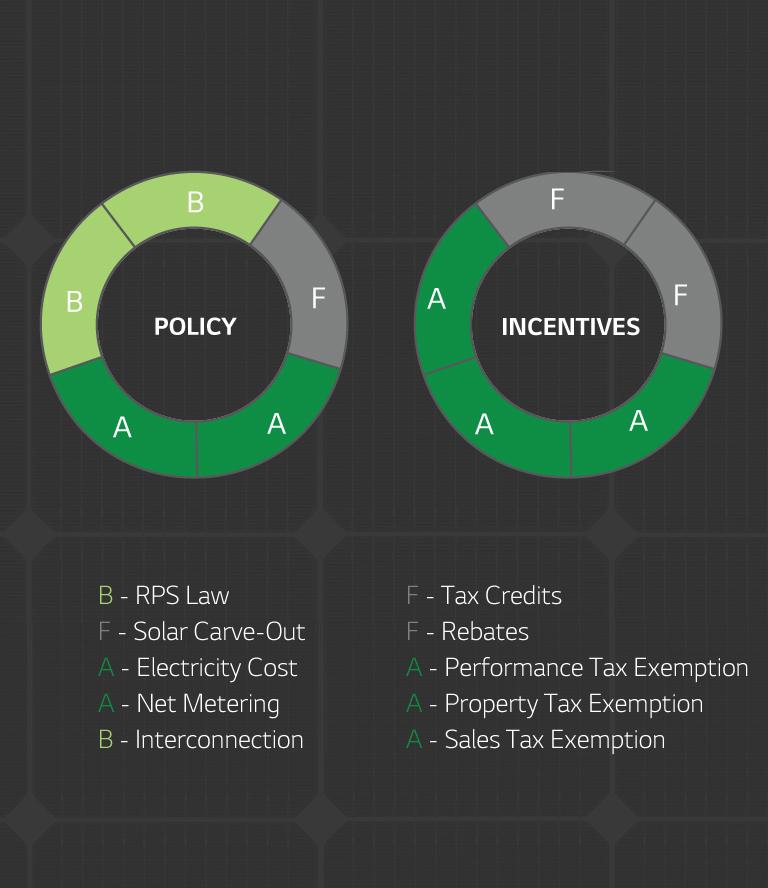 Rhode Island got serious about its RPS law this year, while its amazing performance payments program persists. After jumping five spots last year the state rises another TWELVE big spots in the 2017 ranking, bringing it to the top five! We don’t think they’ll have any trouble hitting those RPS goals, so our new year’s wish is for a further-expanded RPS with a solar carve-out, too! 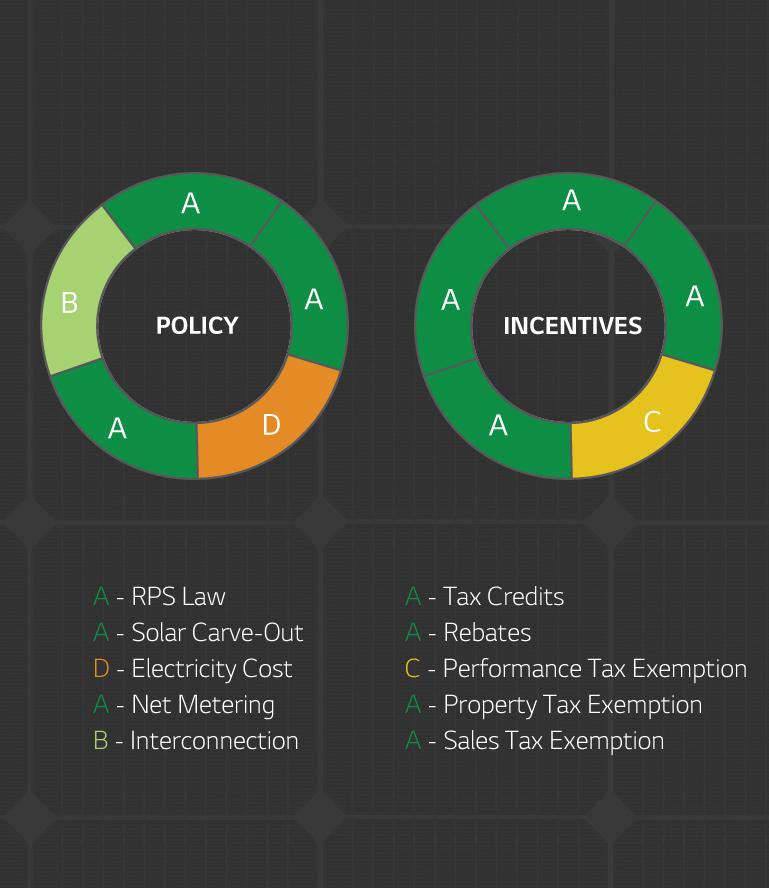 Oregon picks up two big spots this year, because it passed a new RPS with an immense solar carve-out, and its incentives are still going (although not for long). The state’s excellent state solar tax credit is going away after 2017, and you have to choose between performance payments and the rebate program. Still, the potential returns for a solar investment in Oregon are unquestionably good, and the state looks firmly committed to keeping it that way.! 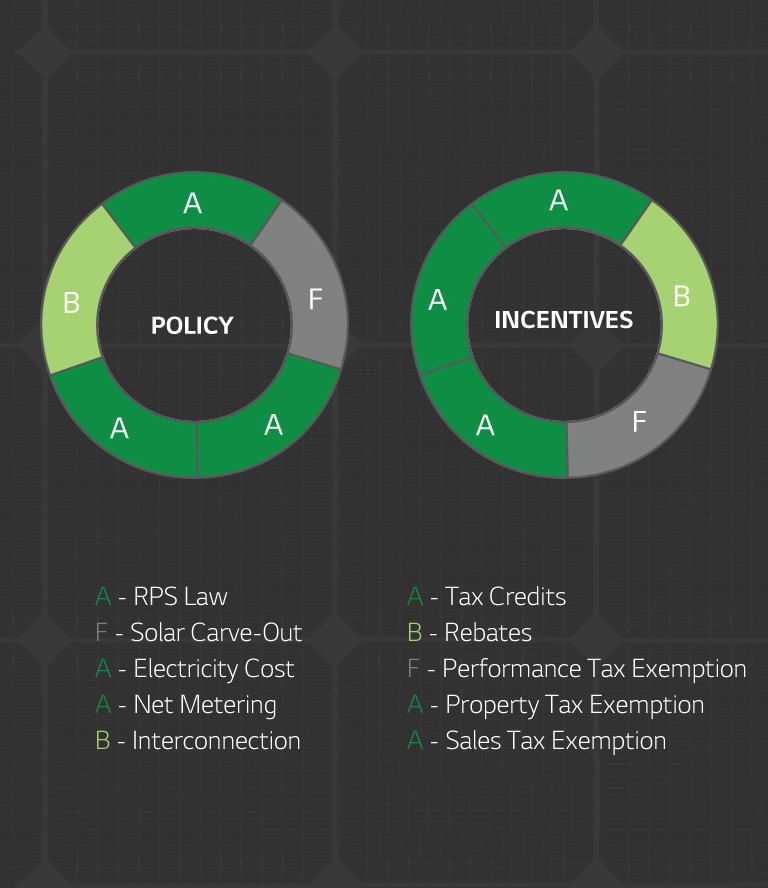 New York had to give up its share of the top spot this year (it was tied with MA and NJ in 2016), but it’s really on a technicality. The state passed a brand new RPS law, but cut its solar carveout in favor of a broader renewable standard. And though the rebates are slowly fading away, the tax credits are still top notch, so New York still earns a place in the top 5 states for solar. 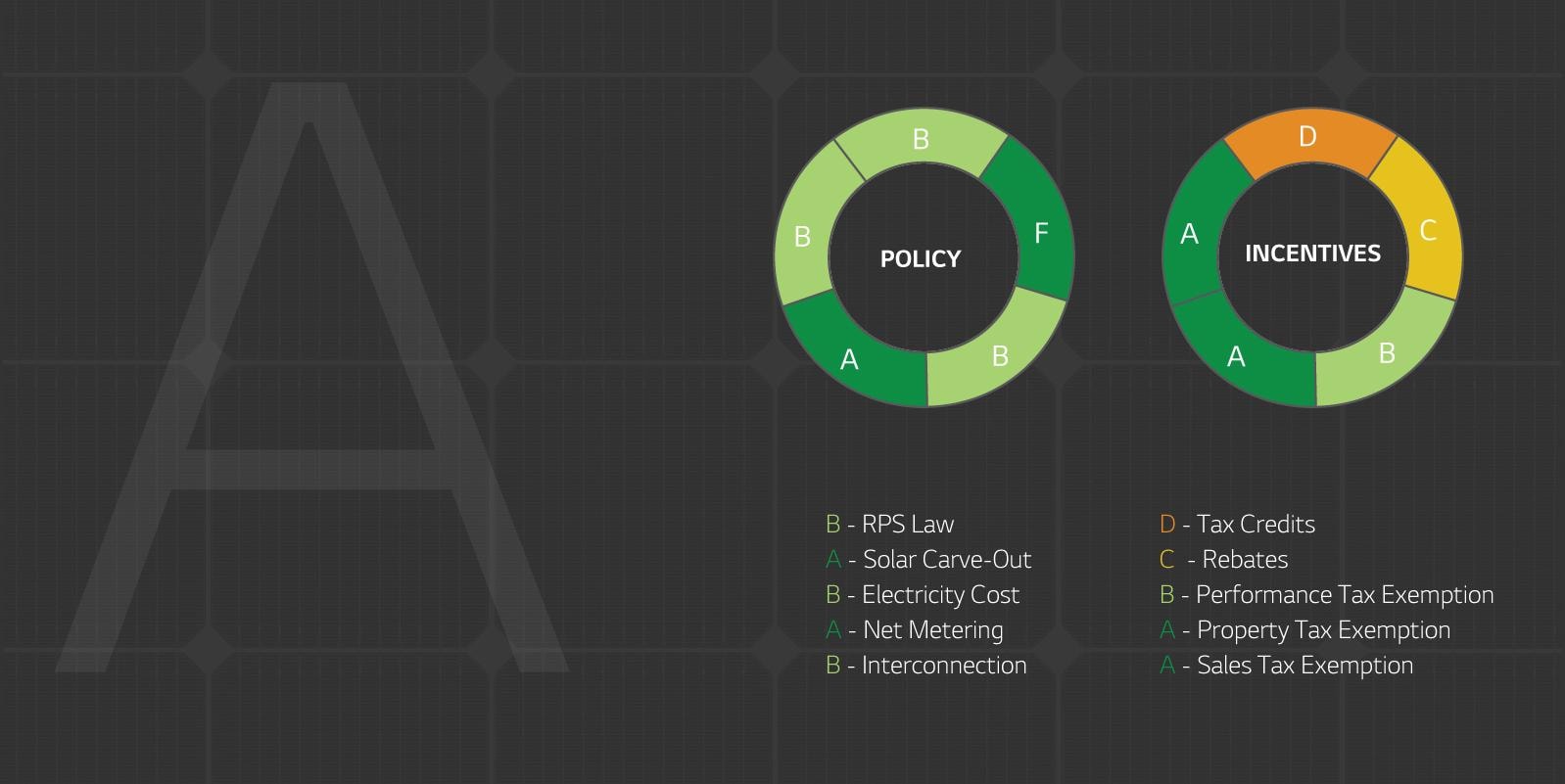 Maryland dropped three spots this year due to the rise of Oregon and Rhode Island. The state still has a great SREC market, rebate program, and solid solar policy. There are some places where we’d shore up what’s missing here, but overall, 5th place is nothing to sneeze at. The Old Line State is fine for homeowners who dream of sunbeams! 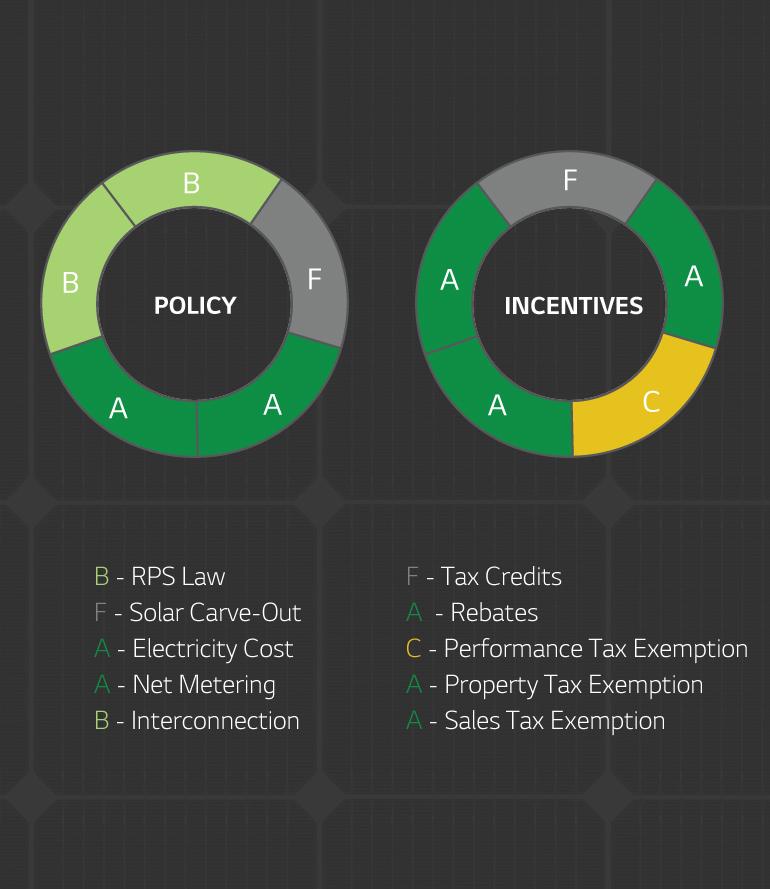 Connecticut drops two spots because of the ascension of Oregon and Rhode Island. The state still has excellent solar policy and incentives—particularly its best-in-the-nation rebates—but it runs the risk of stagnating if there isn’t new renewable goals sometime soon, but it helps that the rebate program is slated to run through 2022. For now, no matter where you are in Connecticut, there are incentives to help you pay for solar and good policy to ensure it maintains its value for years to come. 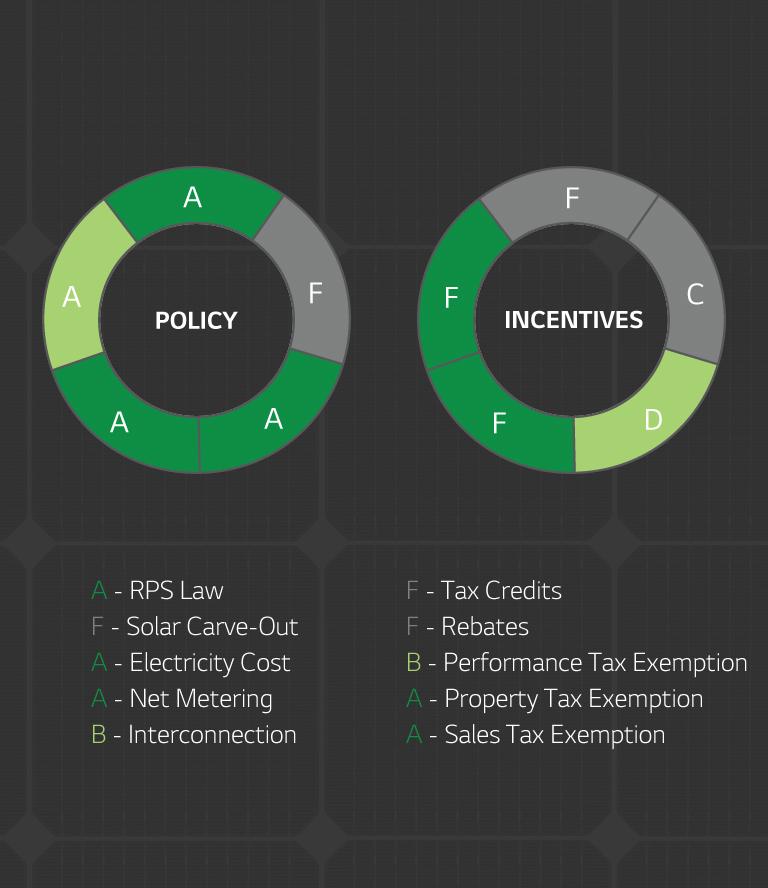 Vermont is a Steady Eddie this year, resting on the laurels of its excellent policy and incentives enacted in years past. The state’s on solar cruise control after enacting the 2nd-best RPS in the country last year, but we say “why not make 2017 a surprise banner year for the future of solar in the Green Mountain State?” Hm, maybe that’s not catchy enough for the bumper sticker yet. Back to the drawing board! 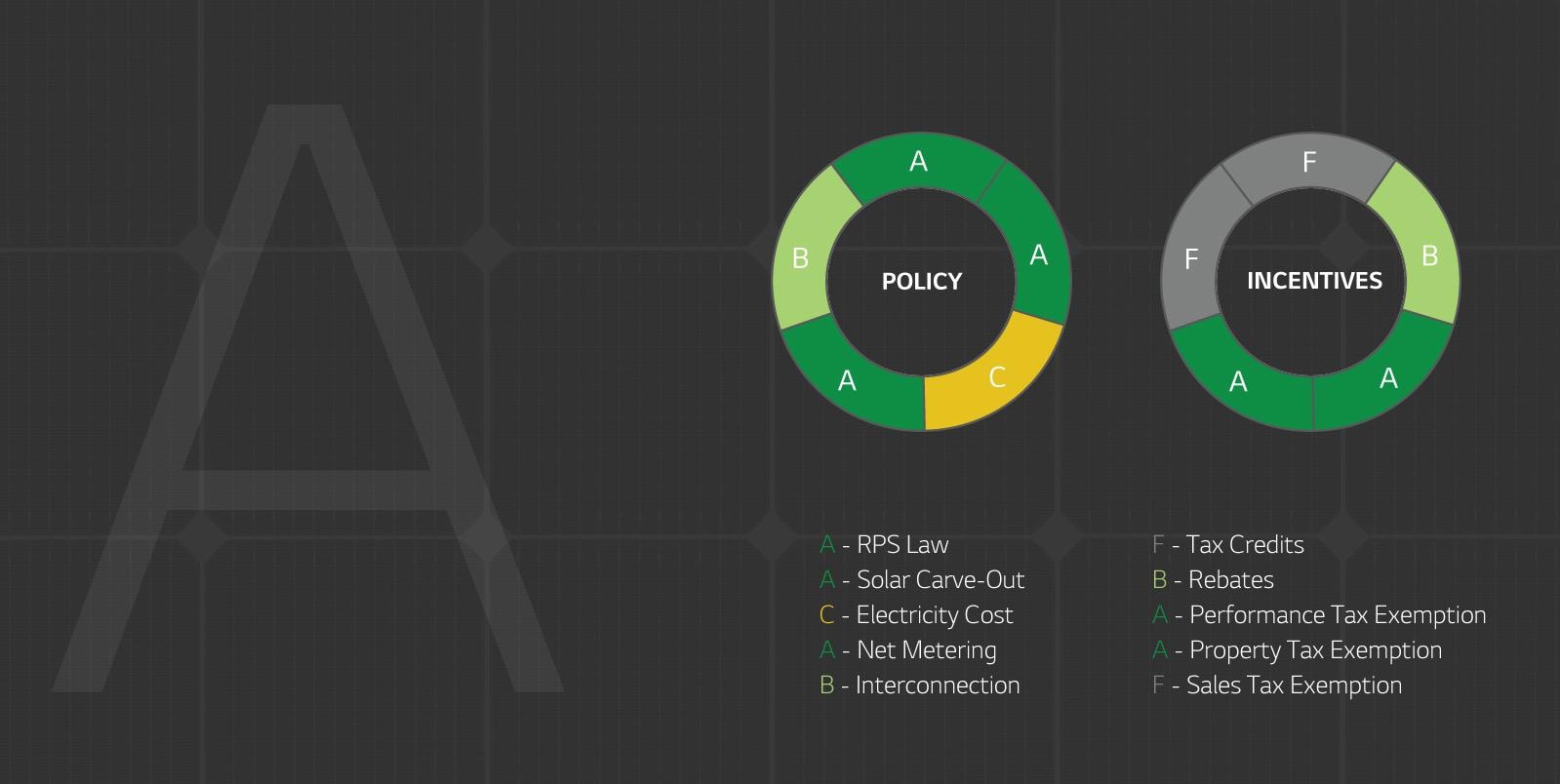 The state still has its super-duper SREC market, but did away with its rebates in favor of the Affordable Solar Program, which was a very successful way to get solar to low income D.C. residents for free. The District could still use a sales tax exemption, but an investment in solar in here is already a great bet. However, the solar getting is so good right now because of the great SREC program, but it won’t be that way forever. People of the District ought to jump on the solar train soon to take advantage of this incentive before it goes away! New Hampshire got into solar early, and its incentives are still going strong! This year, the state gained a few spots, which is nice, but we know New Hampshirites don’t like to brag. Good thing is, they don’t have to! The state didn’t move up because it did better this year; it moved up because other states did worse. Still, no state could complain about being in the top 10, and that’s just where the Granite State deserves to be! 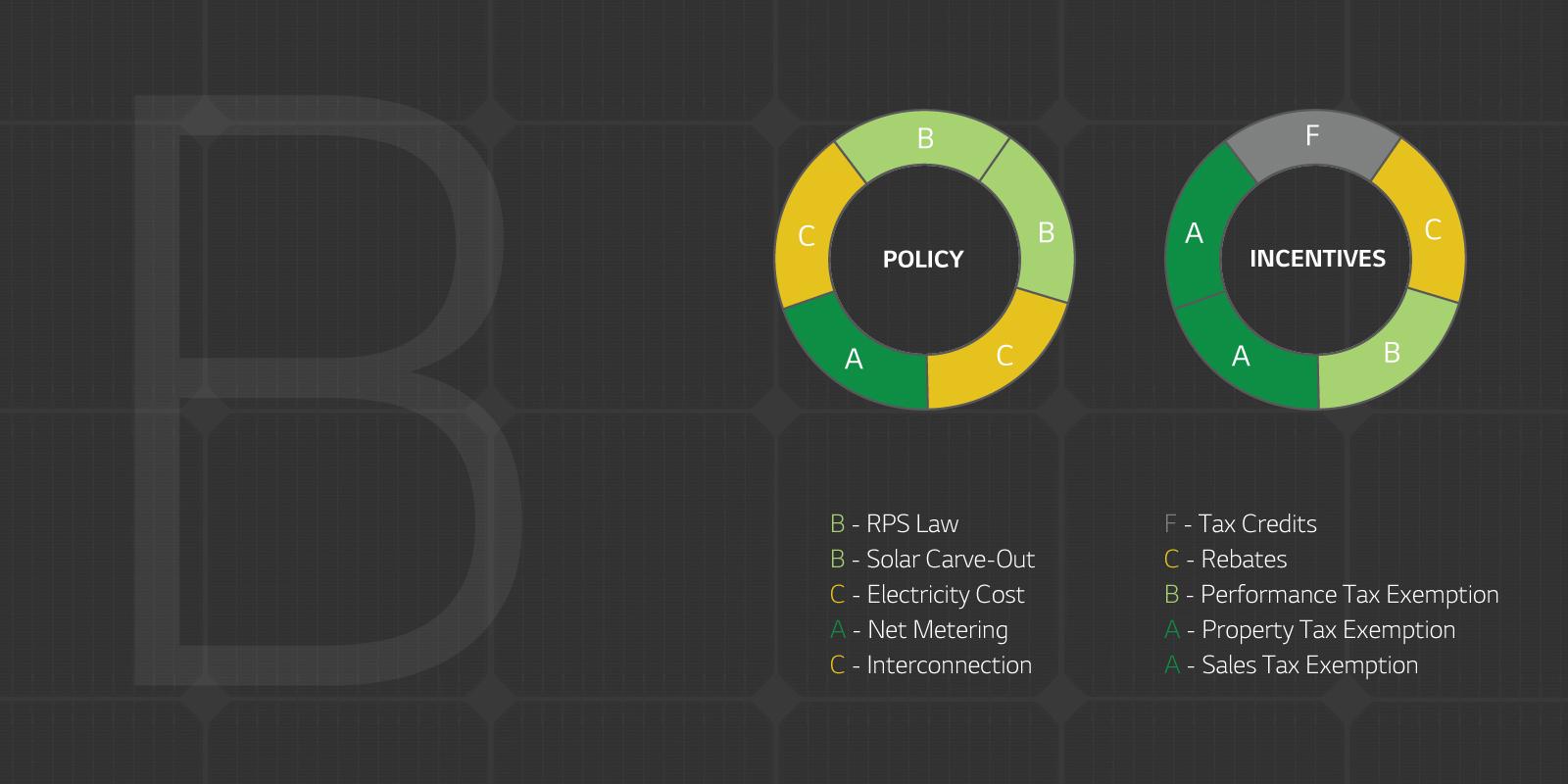 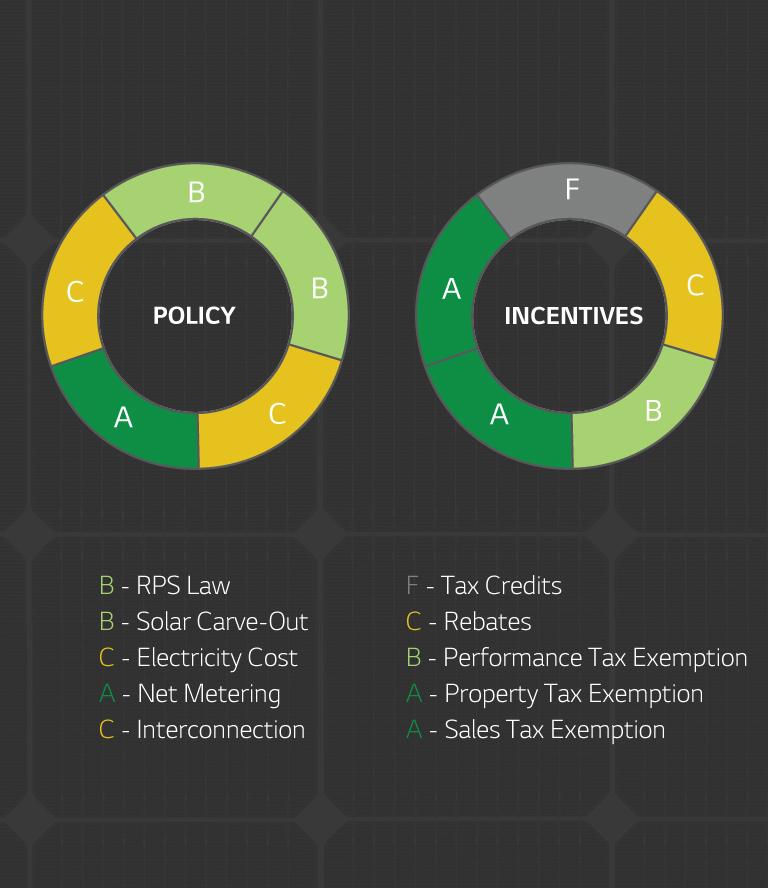 Minnesota dropped a few spots this year, but the state is still a fine place to put panels on your roof. There’s been some drama in the state’s nascent community solar program, but otherwise, we’ve seen a relatively stable year in MN policy and incentives, including the fine Xcel Energy Solar*Rewards program. 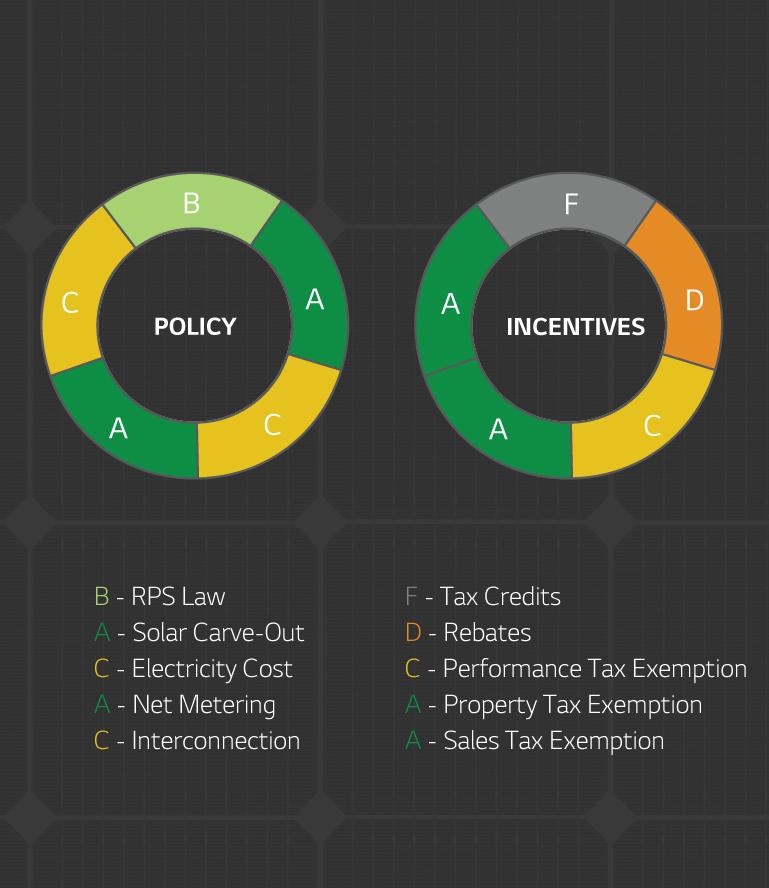 Colorado has a mature solar industry, which came about in large part thanks to the state’s excellent incentives of the past. Unfortunately, those incentives are mostly gone for the big utility companies, and the state is dropped two spots in this year’s rankings simply by not doing much to ensure a great future for solar. The policy base here is strong, but without a further commitment to renewable energy, we’re likely to see little growth in the solar industry for the foreseeable future. 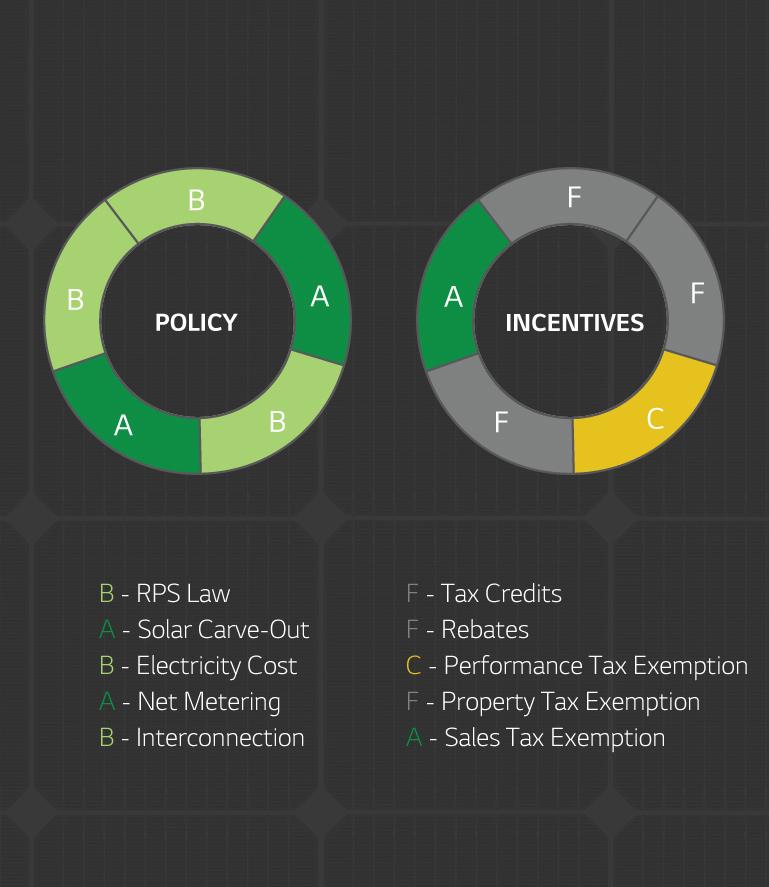 Delaware falls a tiny bit in our rankings, a victim of its own solar success. You see, the state used to have excellent rebates, but they disappeared really quickly because the limits were reached. So many people wanted to go solar in The Small Wonder that the rebates have all but disappeared. The policy here is very strong, so we’d like to see Delaware commit some more funds to renewable energy incentives. Maybe take away some of those tax shelters for corporations… 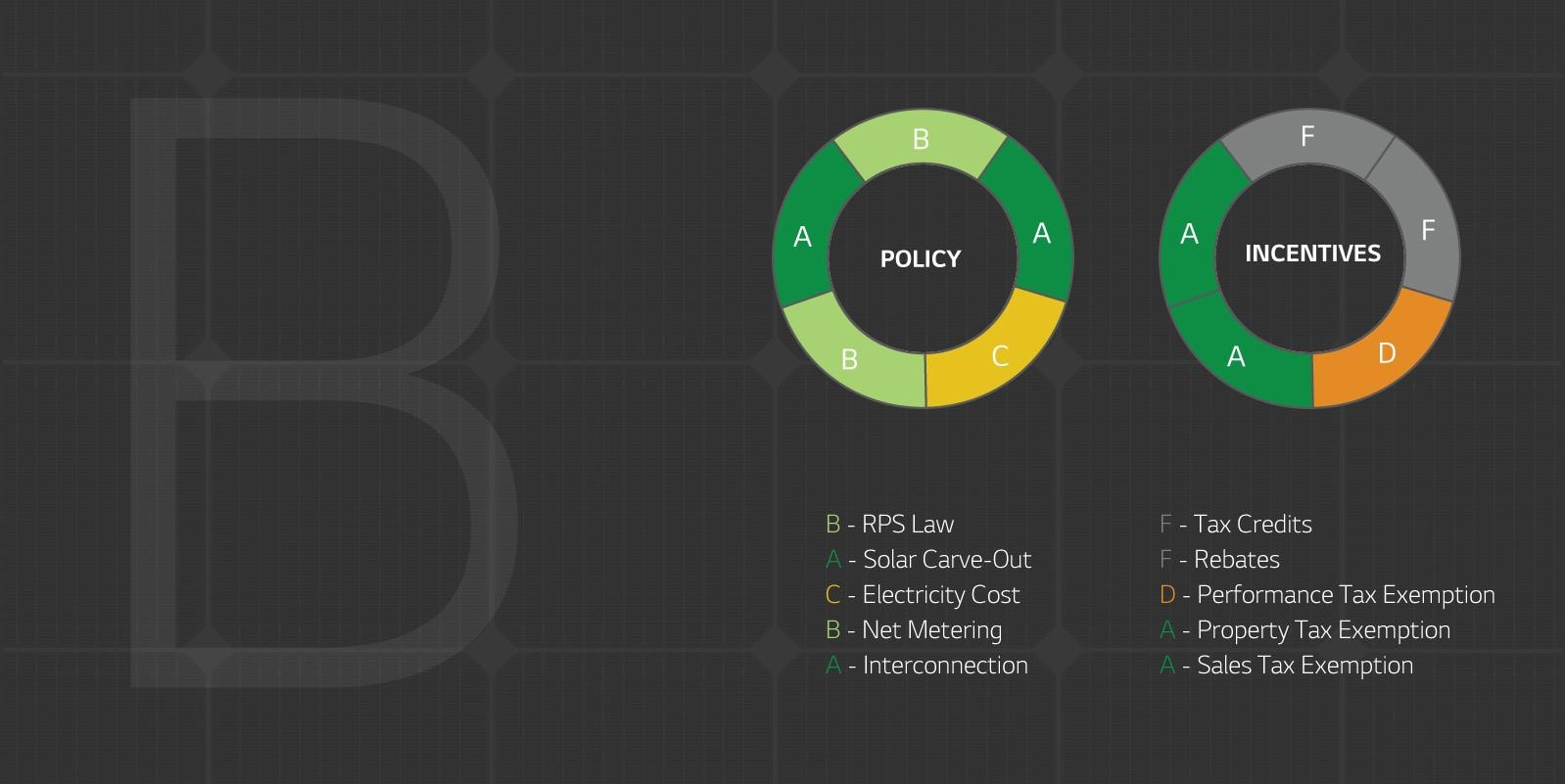 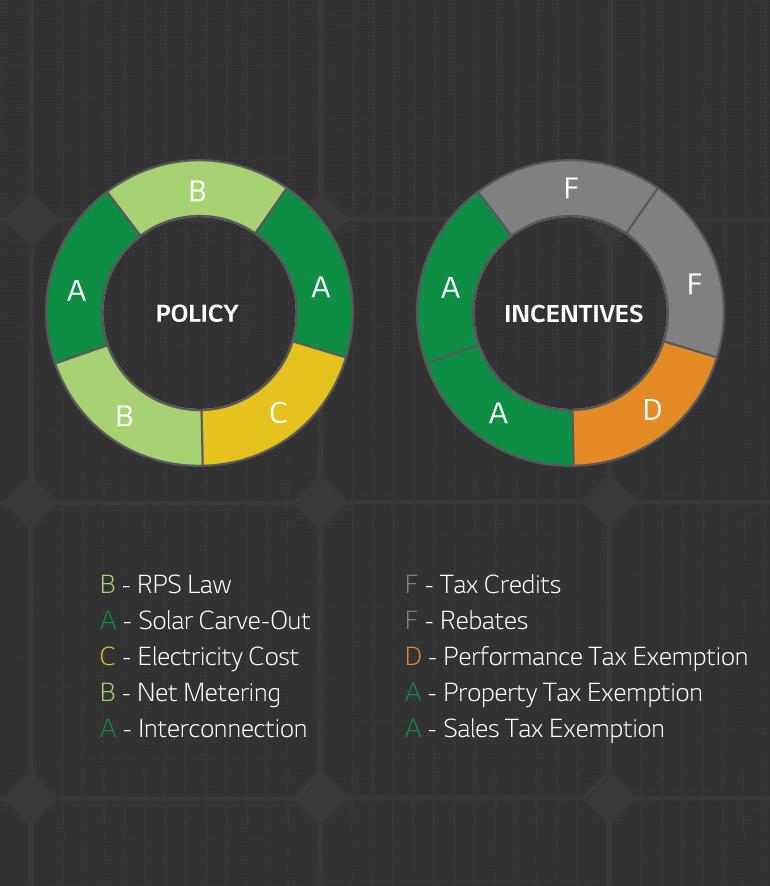 The nation’s best solar carve-outs! Yes, it’s a sunny place, but you can’t take advantage of that sun unless you do a few things right—which The Land of Enchantment has. They’ve called for 4 of all electricity to come from the sun by 2020, but they’ve let their formerly-excellent tax credit go away. That;s the big reason for the 6-spot drop going into 2017. As for the future, we’d still like to see an SREC market here, so all you New Mexico homeowners should call your legislators and get that carve-out increased! 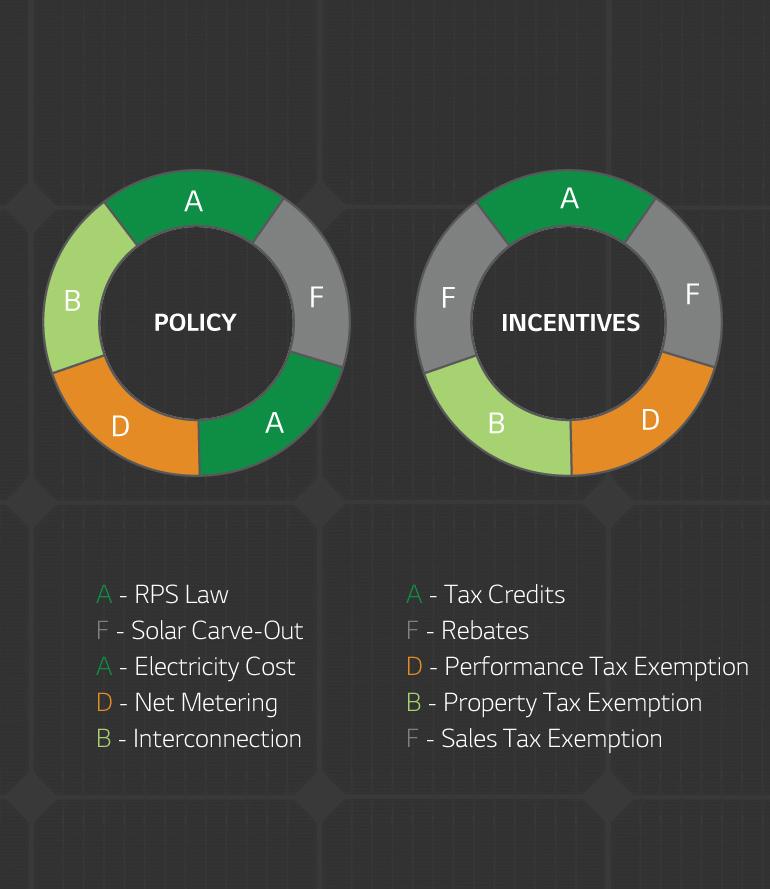 Back in 2015, Hawaii became the first state to set a 100 renewable energy goal. That’s a huge deal! And the Aloha State needs it, too—most of their electricity now comes from burning imported fossil fuels. That imported oil and gas costs a ton, which is why solar doesn’t need big incentives to be successful here. Unfortunately, the state’s main utility, HECO, has a new net-metering-lite way of paying for solar that might prove to be a bad deal in the near future. Still, the electricity prices here are super high and the state has a good tax credit, so a solar investment in Hawaii is just about the best in the nation. 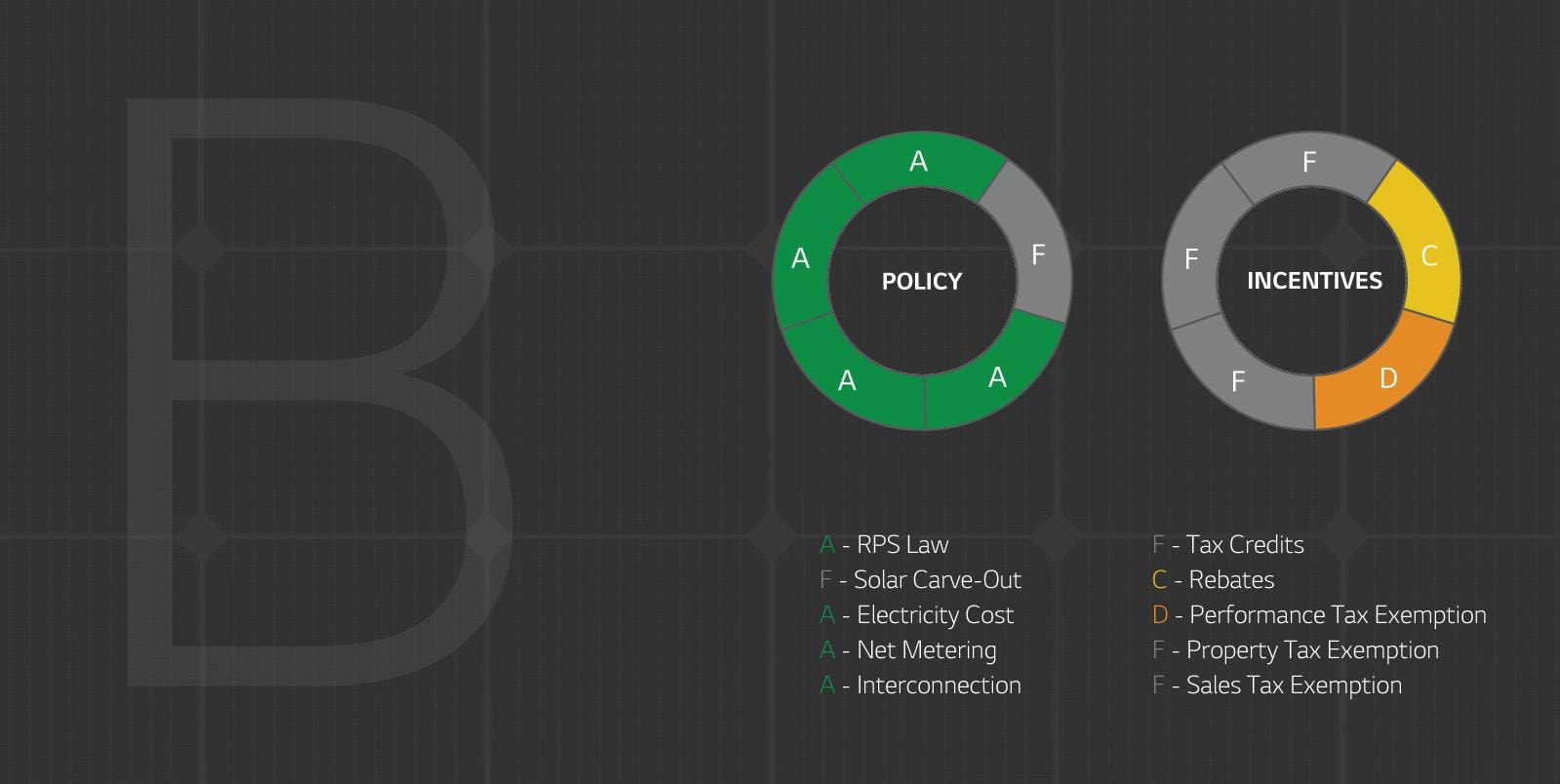 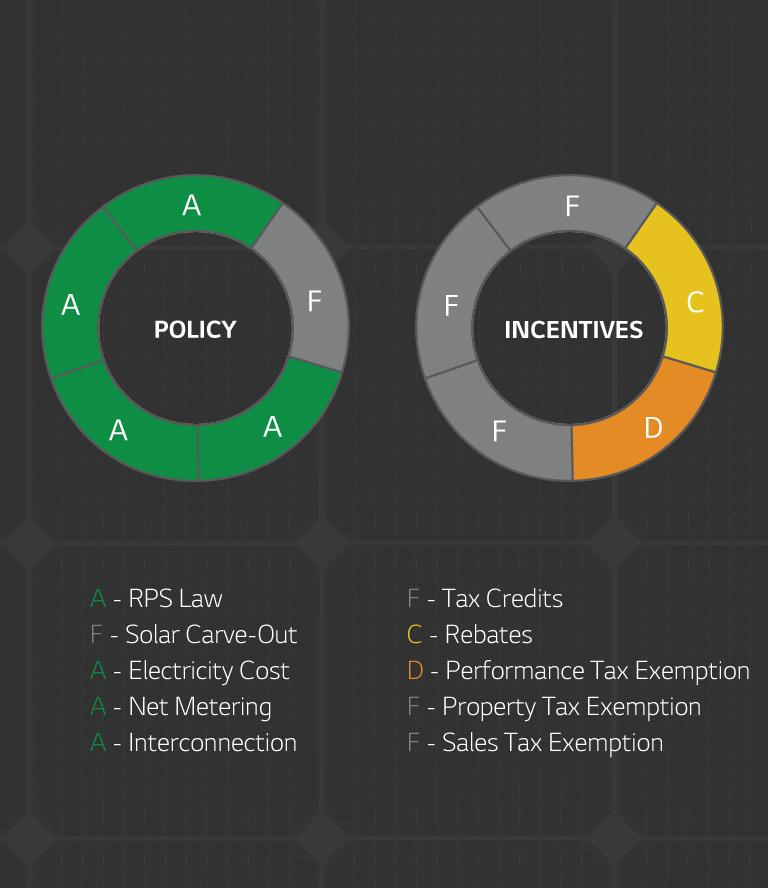 California, reprising its 2016 performance, slips another two spots for 2017 after letting its property tax exemption lapse (update: California’s exemption was extended in 2014, but hidden in arcane tax code—with the change, the state deserves to be in 13th place in these rankings). Still, the Golden State is where the nation’s solar industry was built, and Public Utilities Commissioners here made the whole industry’s day by renewing net metering early last year. That’s why a solar investment here is still a brilliant move, and probably will be for years to come. 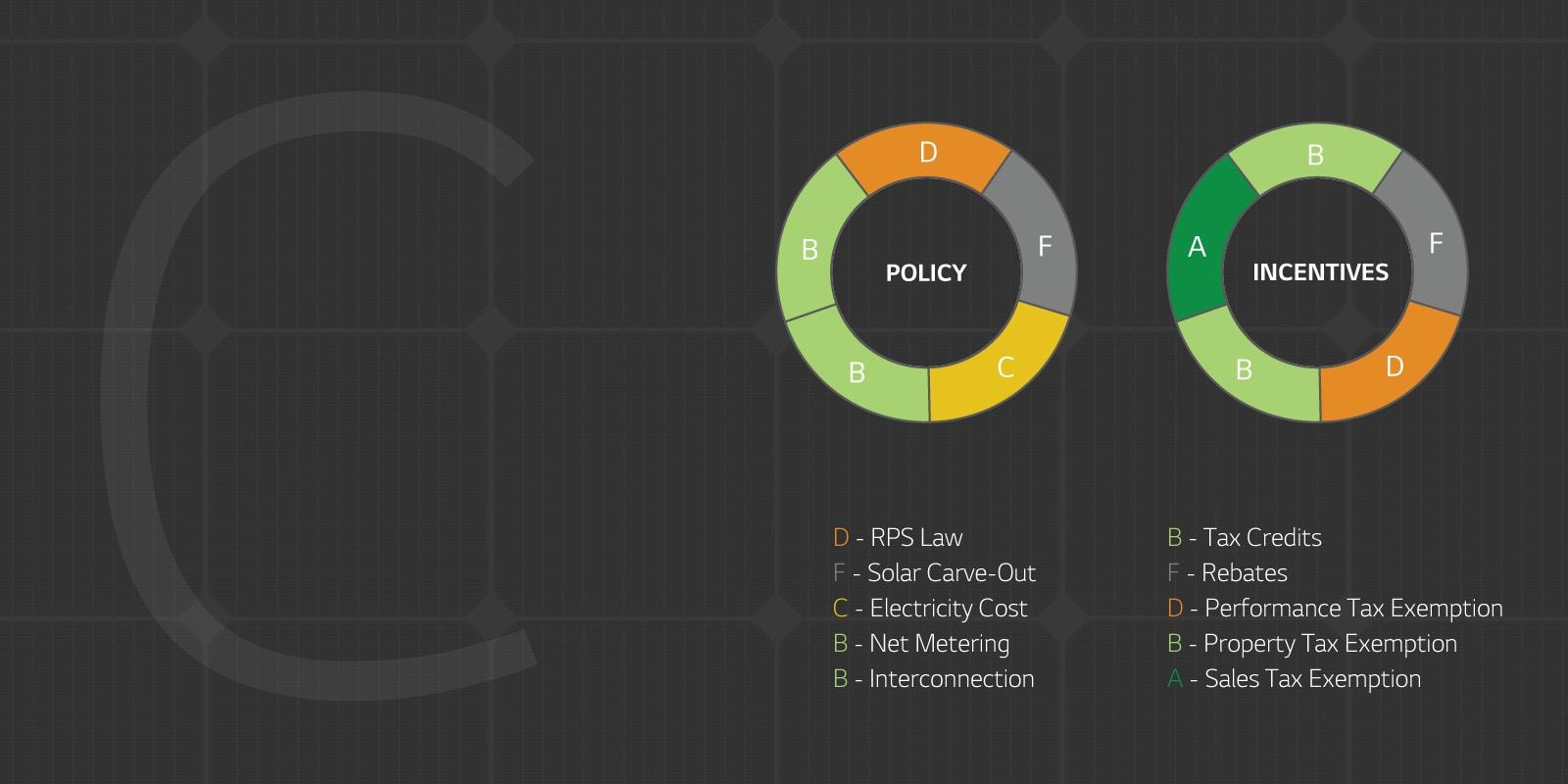 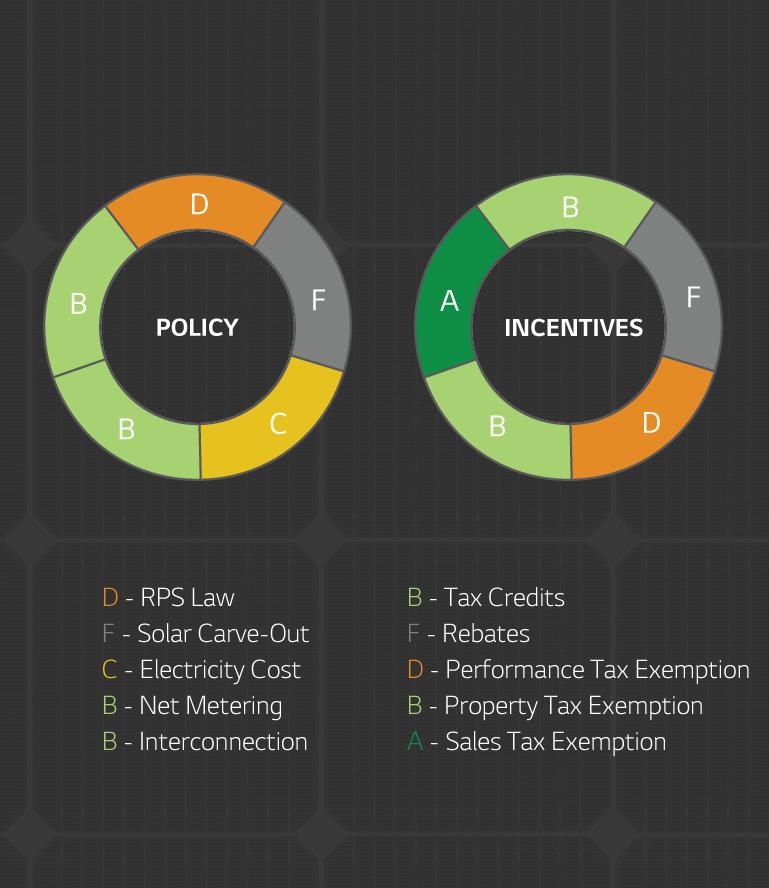 Iowa jumped up 6 spots in our rankings this year, but again, it’s because other states moved down. Not saying there’s anything wrong with Iowa; in fact, given how much sun the state gets on account of being mostly flat and tree-less, Iowa is actually a nice place to go solar. We’d still like to see a real RPS law with a solar carve-out, and maybe some further incentives for farmers and homeowners who go solar. Don’t make us wait too long for that, Iowa!

How much money will solar save you?

Start Free Estimate
© Copyright 2021 ©LG Electronics USA, Inc. All rights reserved. LG and the LG logo are registered trademarks of LG Corp. All other trademarks are the property of their respective owners. Prices, promotions, and availability may vary by dealer. The information contained herein is subject to change without notice. All screen images are simulated.