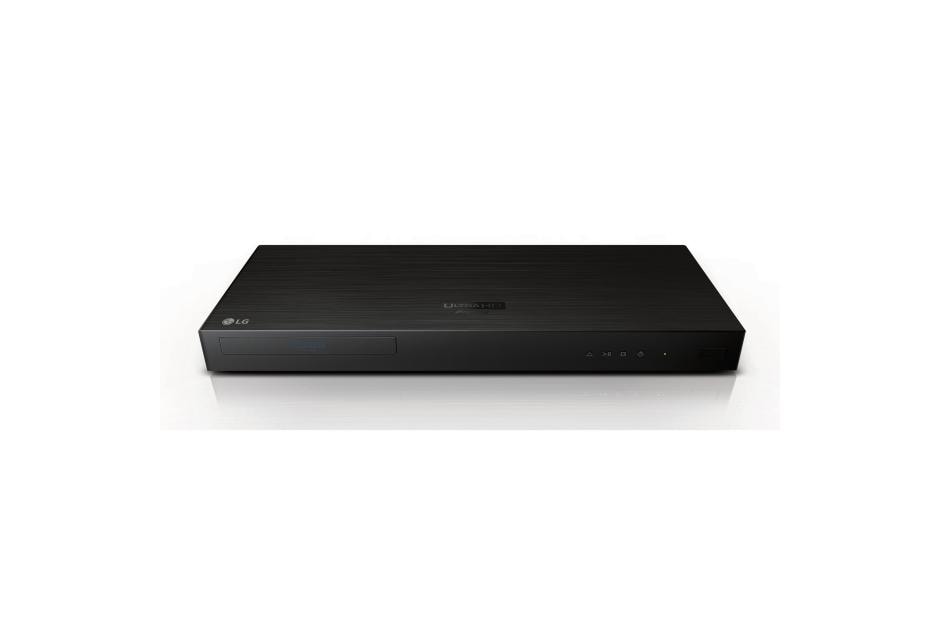 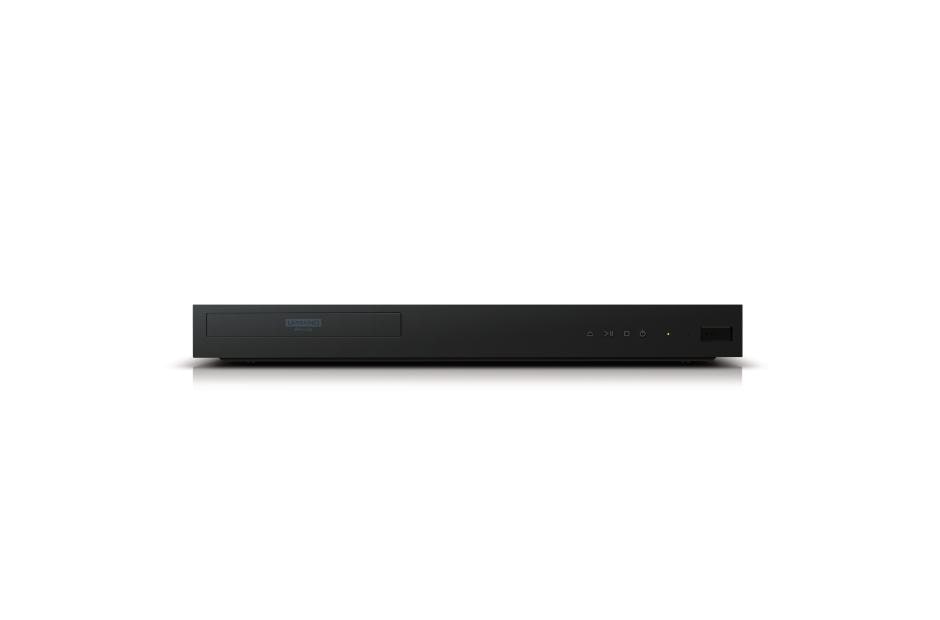 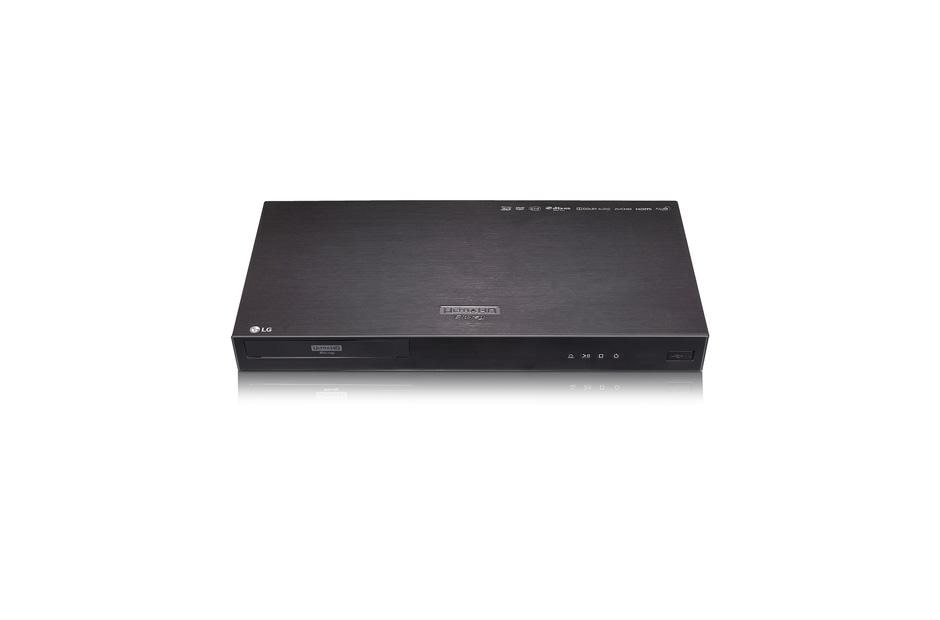 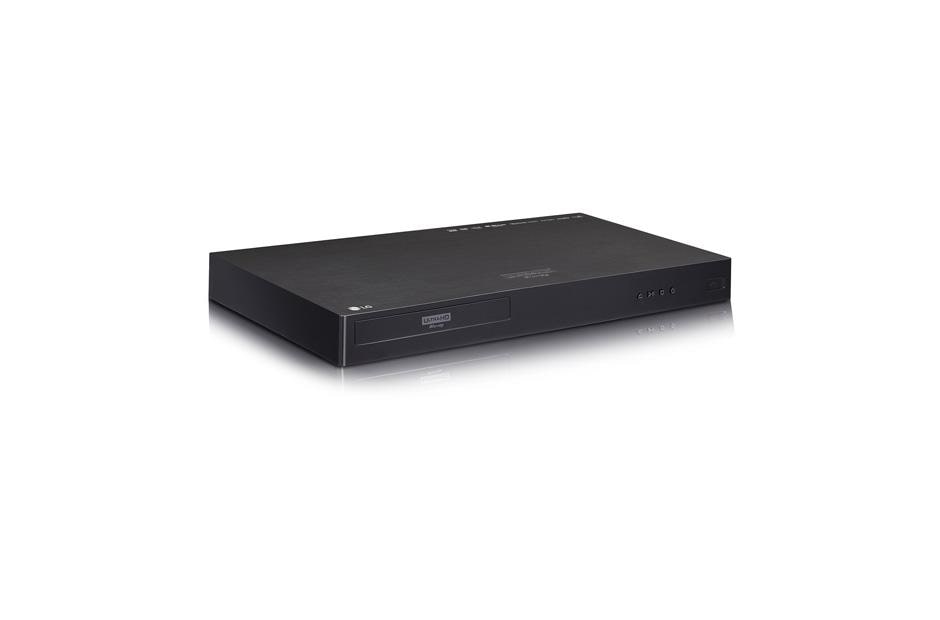 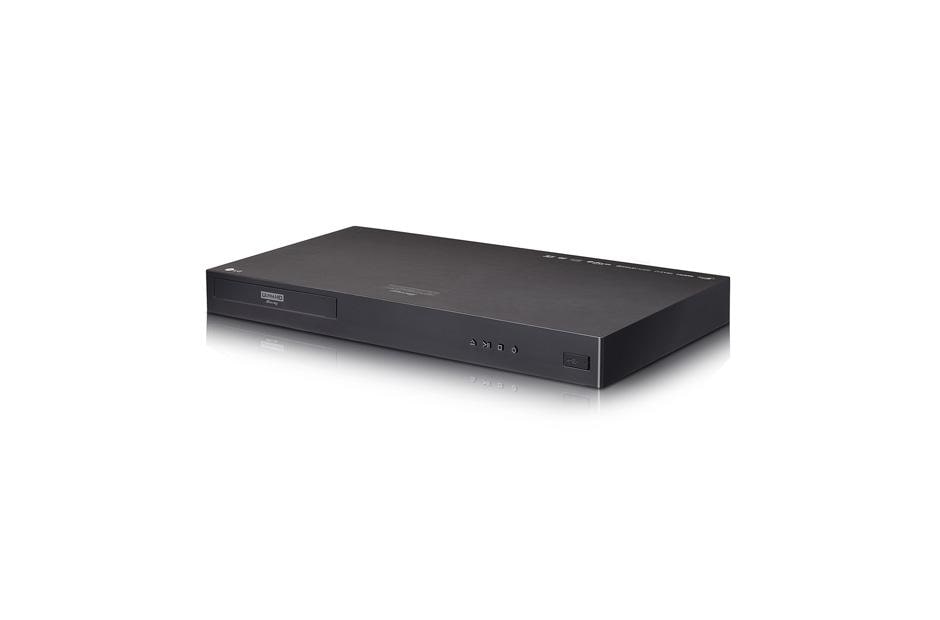 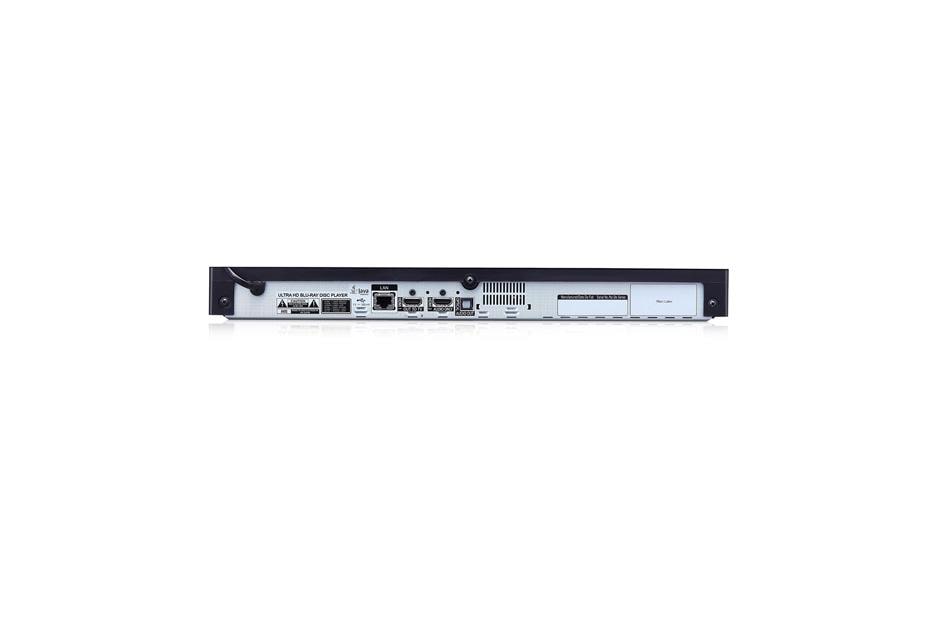 Add items to your wishlist so you can easily find them when you return to LG.com. It's an easy way to keep track of that special something you've had your eye on or save gift ideas for friends and family.

Added Wall Mounting Services
Your professional will place your wall mount and hang your TV on the wall of your choice. Please add a wall mount if you don’t have your own mount. Mounts must be compatible with TV.
Notify Me When Available

Enter your email address below to receive a notification as soon as this item is back in stock.

Enter your Email
Please enter a valid email
Thank You!

Your email was received. We will let you know when this product is back in stock.

Thank You for your Inquiry

A member of our Sales team will be in contact with you shortly.
4K Ultra HD Blu-ray Disc™ Player with HDR Compatibility 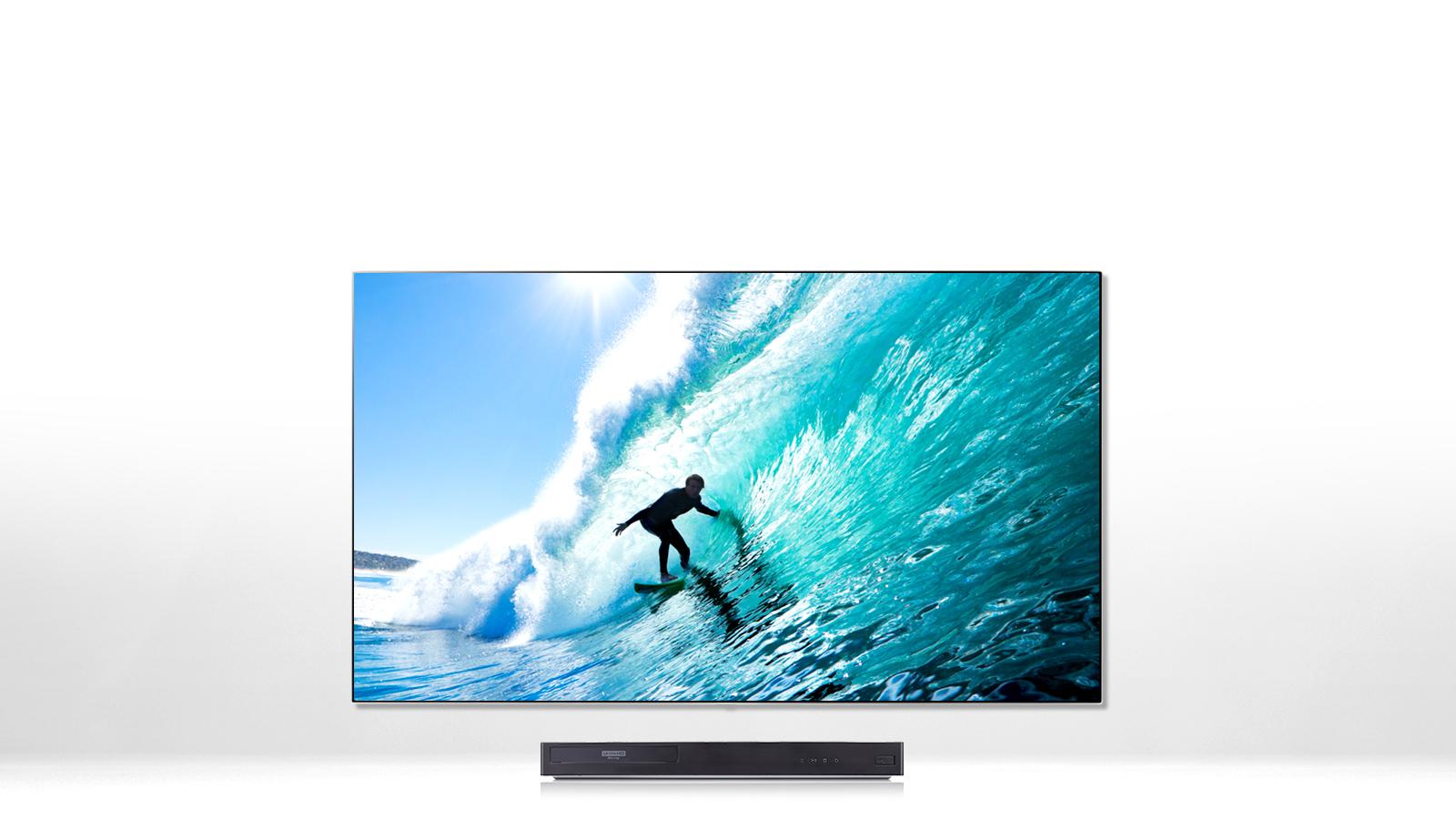 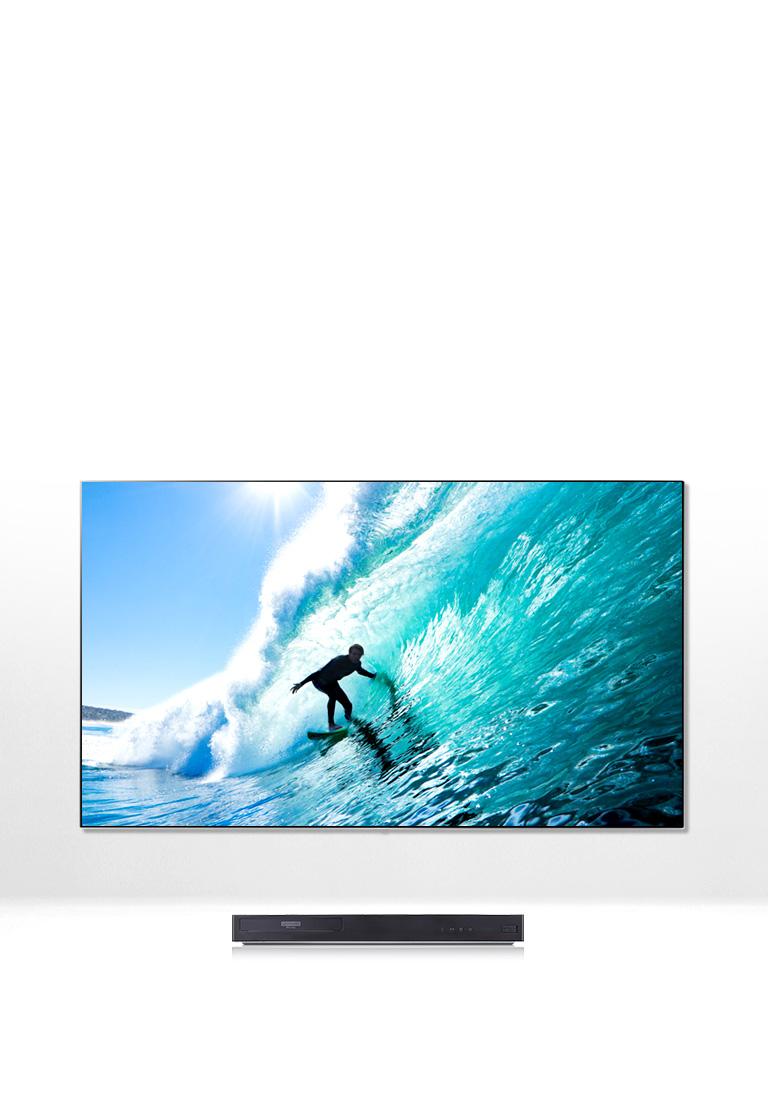 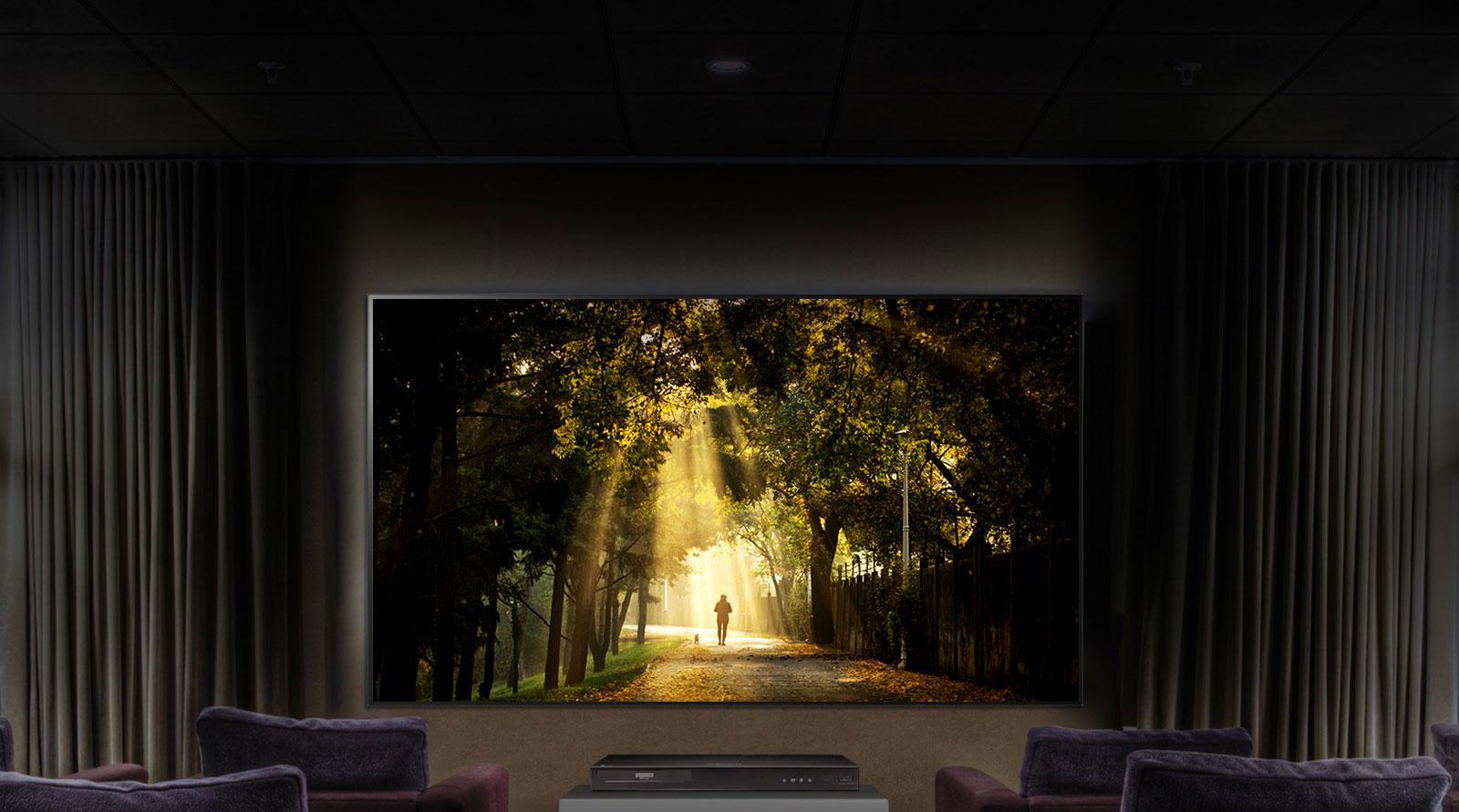 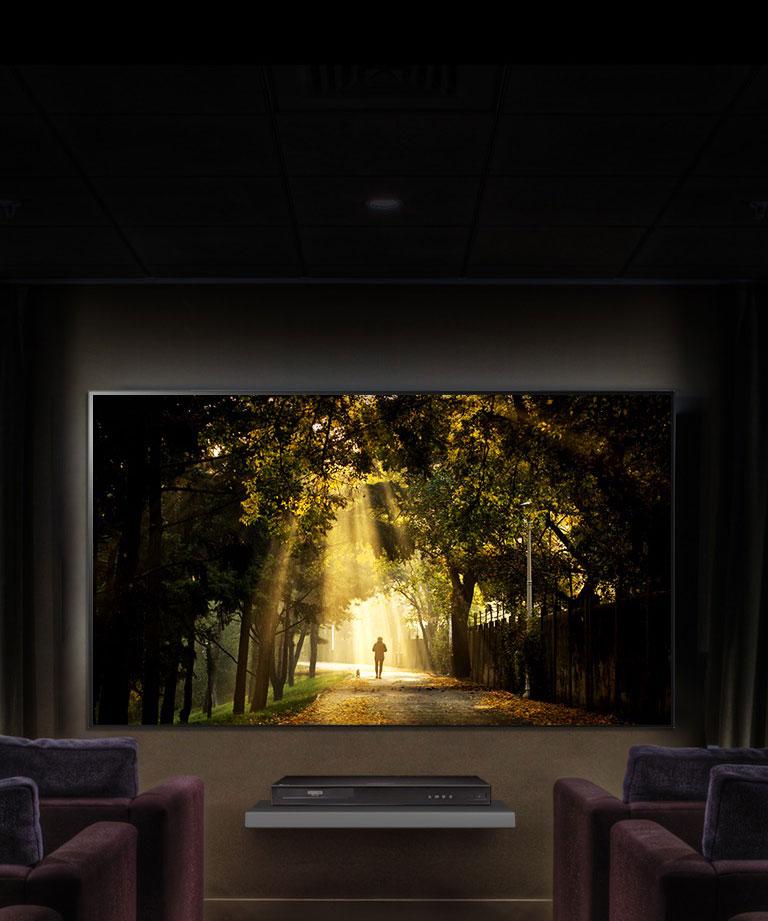 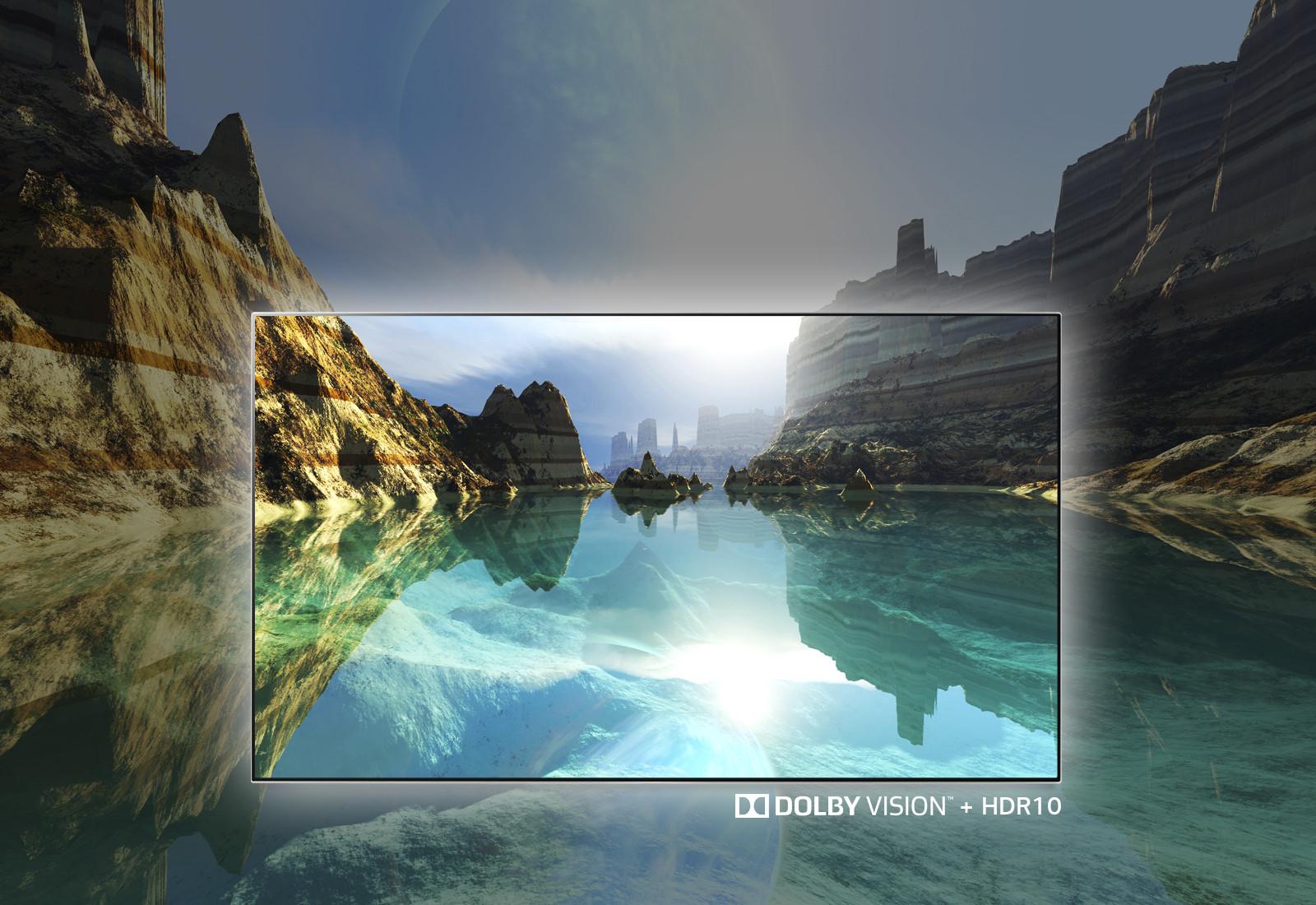 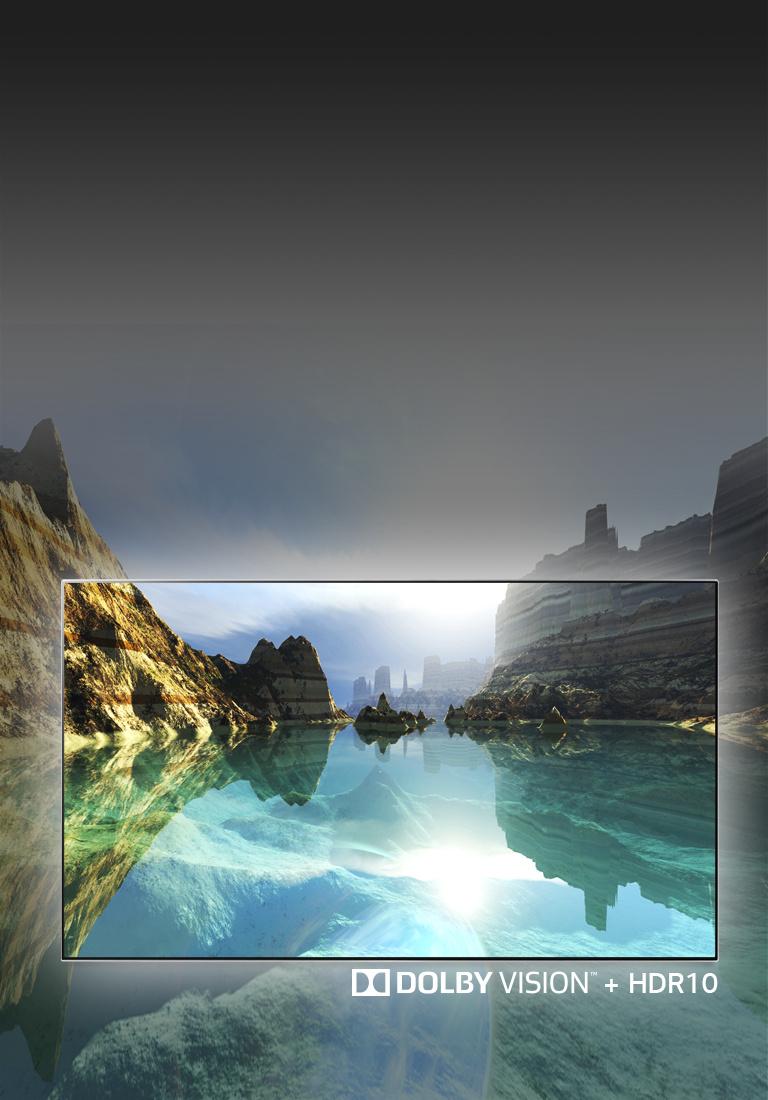 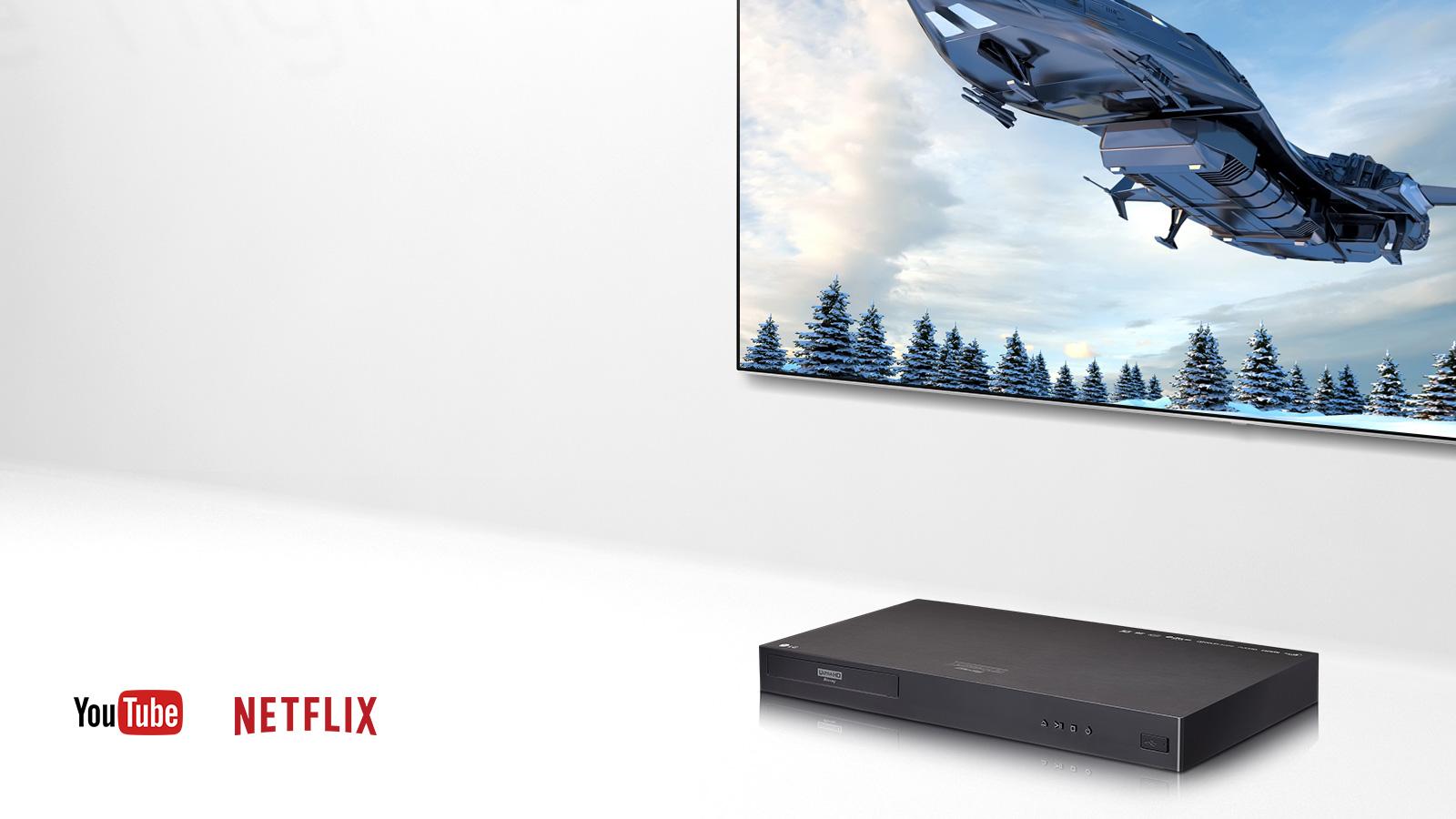 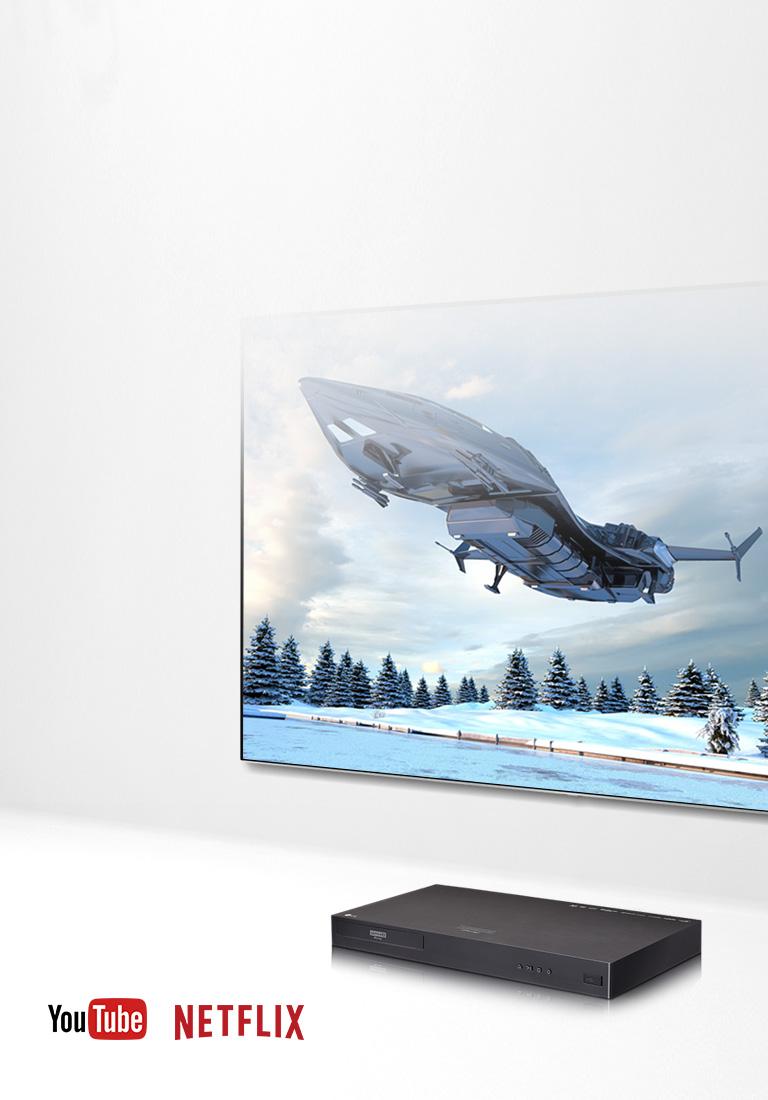 Popular online video services such as Youtube® and Netflix offer a wide range of premium 4K content, much of it unavailable from any other source.

* Additional subscriptions services may be required. Content partner lineup and availability may change without notice. 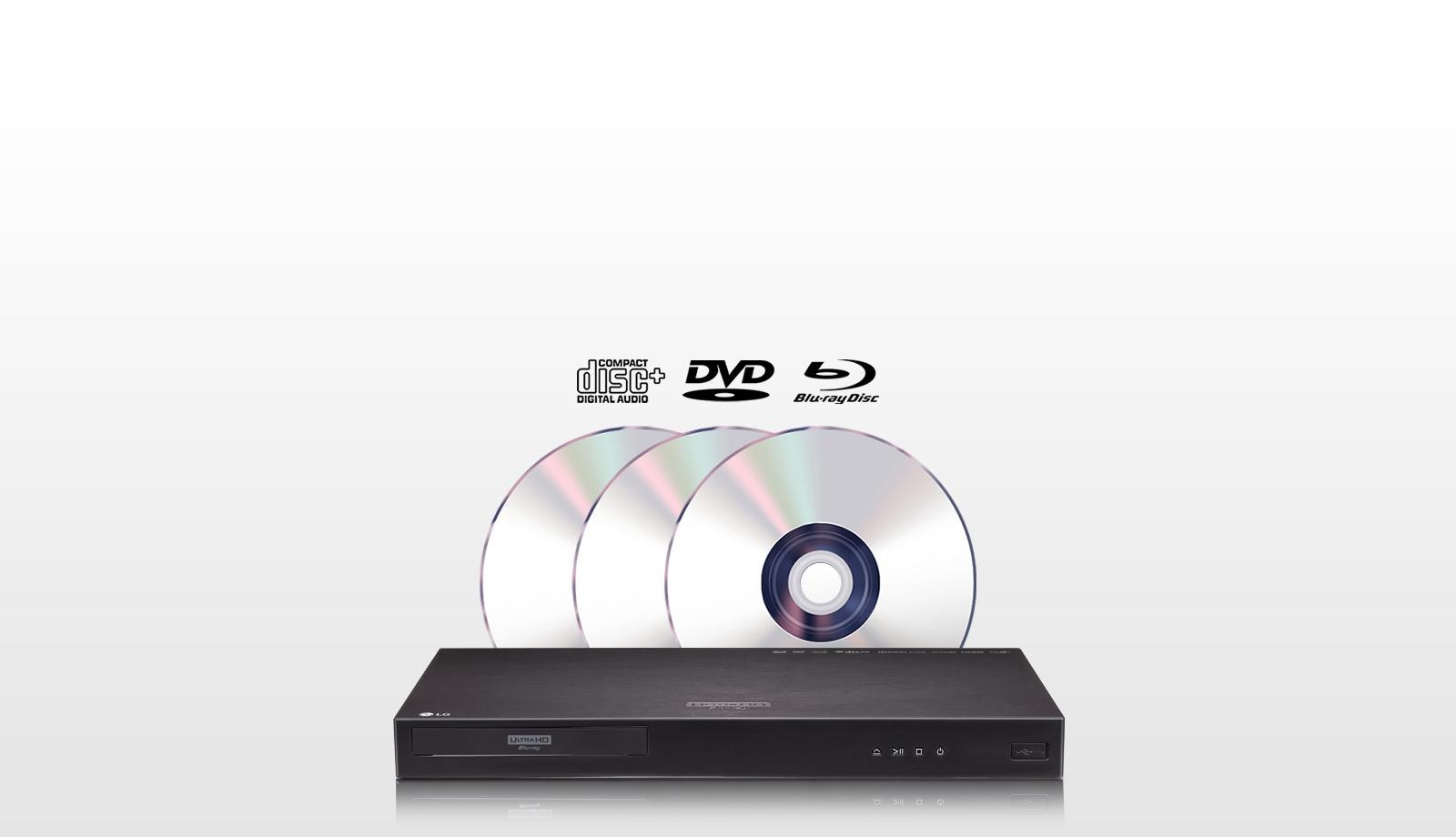 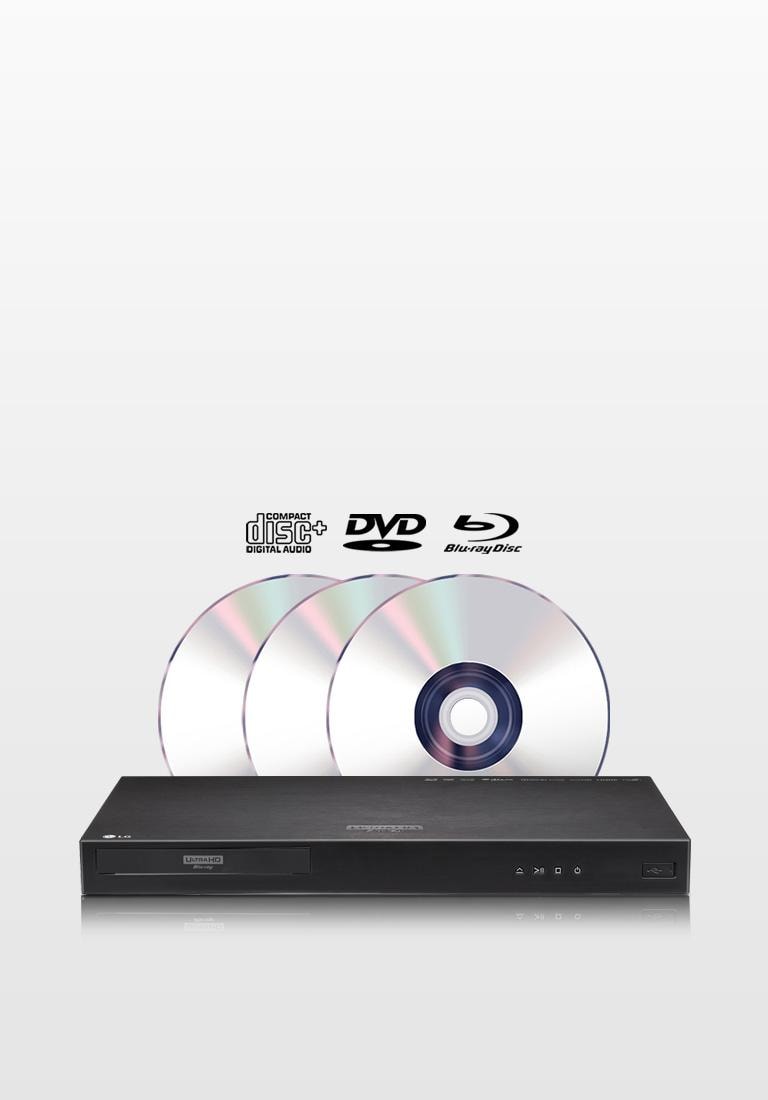 Have a library of Blu-ray discs and DVDs? The UP970 Ultra HD Blu-ray disc player supports both of these popular legacy standards, so old favorites and new discoveries won’t be left behind. 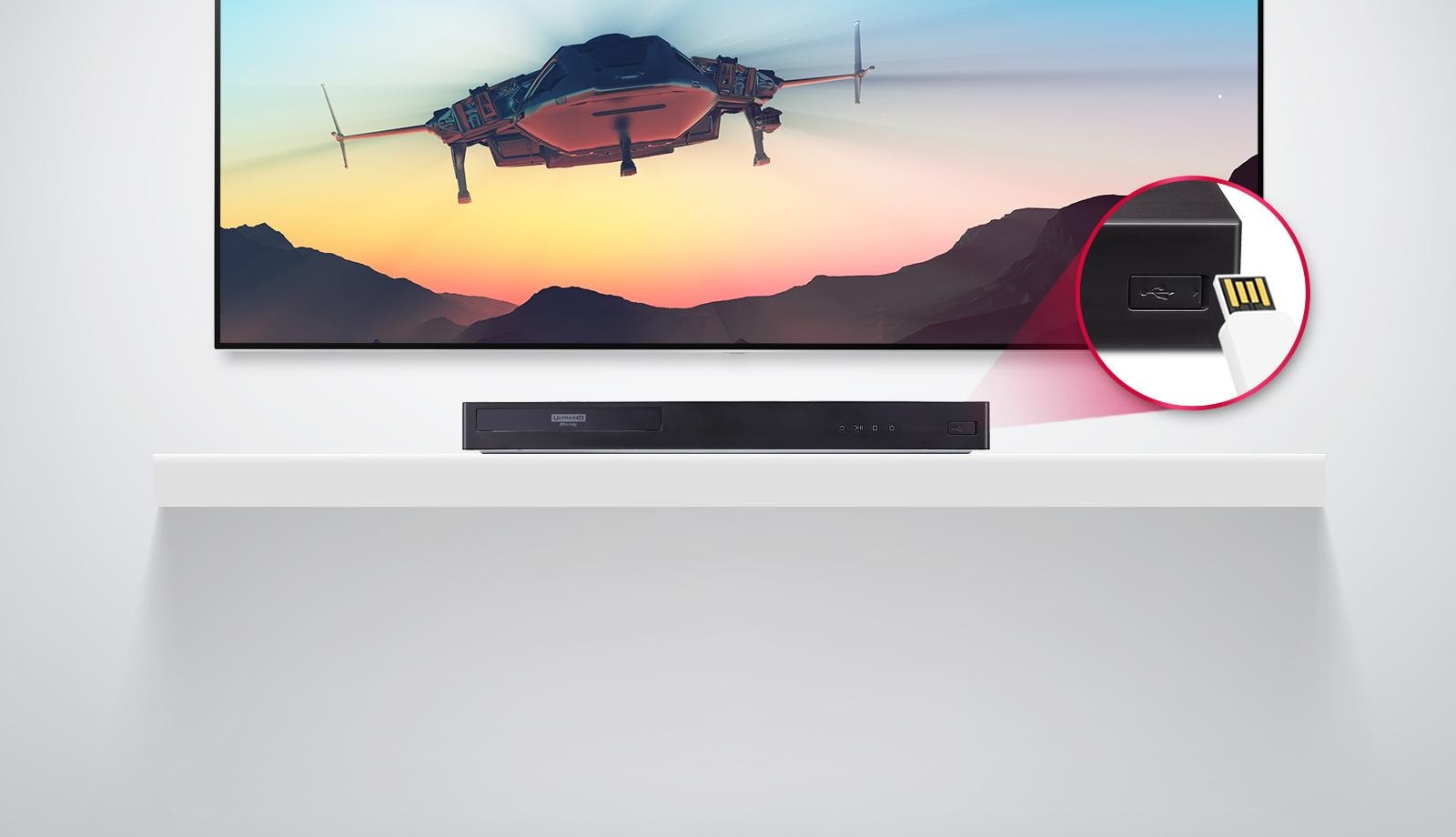 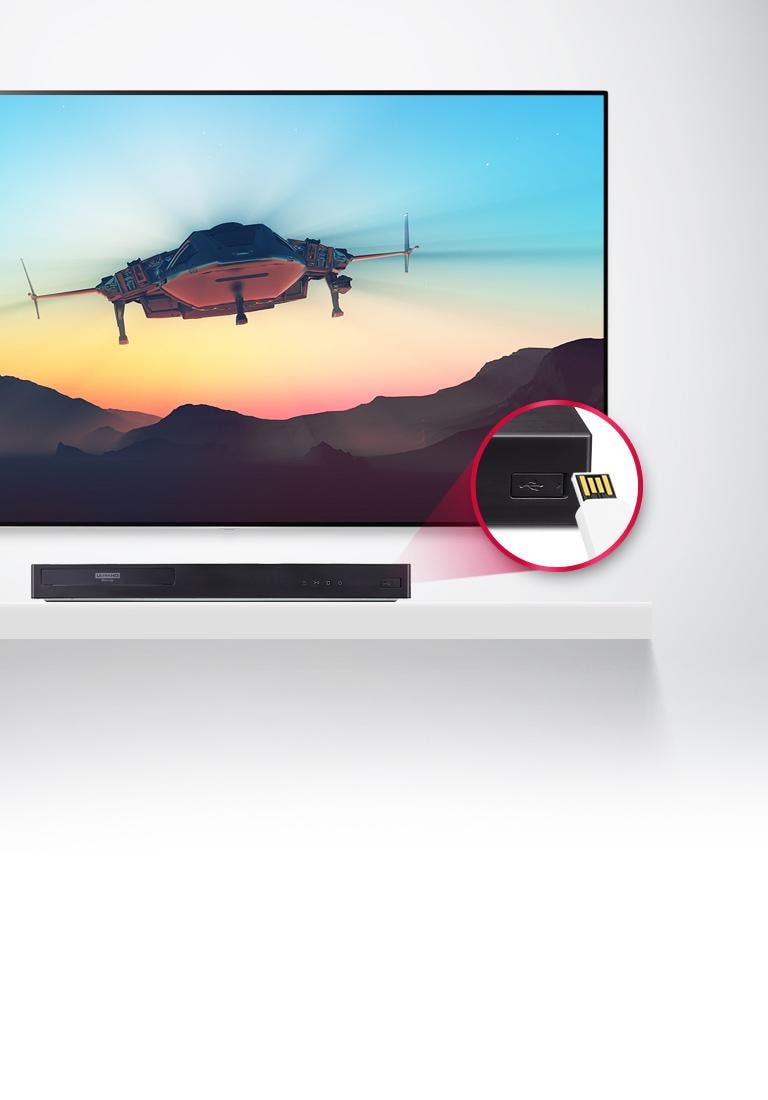 The USB port here allows you to quickly, easily connect a digital storage device and share all your digital media. Just plug it in and use your remote control to navigate through your files.

Rated 5 out of 5 by David vaz from Not happy I bought this smart DVD player to download apps .. was disappointed it doesn't
Rated 3 out of 5 by Cmartin54 from It’s amazing It’s amazing If you you only want it to work for a month.
Rated 2 out of 5 by aldako02 from Not what I expected. Chronically some loud noise when playing Blu-ray play this and also doesn’t perform like it supposed to it has connection issues with the TV and surroundsound which are all LG at if I had paid regular price for this I would’ve not have bought this product
See All Reviews

We're here to support you with our product.

Choose a support option below:

See Warranty Information
Manufacturer’s Limited Warranty Summary.
Period of Coverage Download
Refer to the detailed Warranty information delivered in your product packaging.
If you need Repair Service, submit an online Request a Repair or Contact Us. Please have the Serial number of your product and proof of purchase ready. Out-of-warranty service fees may apply for diagnosis, parts, and labor.

Ask your questions. Share your answers.
Please review the detailed product information and help guides in the Product Support section for this product prior to posting a question.

How can I tell what disk regions my LG UP-970 will play. contrary to what is indicated in the manual, there is no label on the back or bottom of the unit that indicates this. Thanks!

Can you play other streaming services like HULU VIKI FUNIMAITON, Internet from the player from LG UP970

Asked by: KennethV
The only pre-installed apps on the LG 4K Ultra HD Blu-ray Disc&trade; Player with HDR Compatibility, Model # UP970 are Netflix and Youtube&reg;. You can stream from other apps that are on your TV if it has preinstalled apps on it...^IFV
Answered by: Ivanf

Will this player UP 970 going to have a DOLBY VISION UPDATE? The UBK90 LG is selling is basically the same player as the with firmware enhancements and it hasnt got the problems the 970 has.

Asked by: Kusakun
The LG 4K Ultra HD Blu-ray Disc&trade; Player with HDR Compatibility, Model # UP970 is a discontinued unit so it will not be receiving any more firmware updates...^IFV
Answered by: Ivanf

I have a SONOS playbar which will only accept optical cable for sound. I have an LG OLED tv which will pass through 5.1 to the soundbar. Can the UP970 convert a 7.1 DTS signal to 5.1 and output it through the HDMI out?

Asked by: jimbo987
The LG 4K Ultra HD Blu-ray Disc&trade; Player with HDR Compatibility, Model # UP970 supports the LPCM, Dolby True HD, Dolby Digital Plus, Dolby Digital, DTS, DTS 2.0 + Digital Out, DTS-HD Master Audio, FLAC, AAC, WMA, MPEG 1/2 L2, and MP3 audio formats. An LPCM (usually referred to as just PCM) signal is read off a disc and can be transferred in two ways. One way is by retaining its digital form and sending that signal to a home theater receiver via a digital optical, digital coaxial, or HDMI connection. The receiver then converts the PCM signal to analog so that it can be sent through the amplifiers and on to the speakers. The reason the PCM signal has to be converted to analog is that the human ear works by hearing analog audio signals. The second way is for the player to convert the PCM signal back to analog form internally, and then transfer the re-created analog signal to a home theater or stereo receiver via standard analog audio connections. In this case, the stereo or home theater receiver does not have to perform any additional conversion in order for you to hear the sound. The UP970 can also read undecoded Dolby Digital or DTS type audio signals. Dolby and DTS are digital audio formats that use coding that compresses the information in order to fit all the surround sound audio information digitally onto a DVD or Blu-ray Disc. Usually, undecoded Dolby Digital and DTS audio files are transferred to a home theater receiver for further decoding to analog. The other option is that once read off the disc, the UP970 can internally convert Dolby Digital and DTS signals to uncompressed PCM, and then pass that decoded signal directly to a home theater receiver via an HDMI connection, or convert the PCM signal to analog for output via two or multichannel analog audio outputs to a home theater receiver that has the corresponding compatible inputs. However, since a PCM signal is uncompressed, it takes up more bandwidth transmission space. So, if using a digital optical or coaxial connection, there is only enough room to transfer two channels of PCM audio. For Dolby Digital or DTS surround signals that have been converted to PCM, you need to use an HDMI connection, as it can transfer up to eight channels of PCM audio. Digital Optical and Digital Coaxial connections can only access standard Dolby Digital/DTS surround signals and not the higher resolution digital surround sound formats, such as Dolby TrueHD, Dolby Atmos, DTS-HD Master Audio, and DTS:X. Those higher-resolution audio signals can only be passed through the HDMI connection...^IFV
Answered by: LGJoel

Recently buyed, and I played a pair of 4k Blu-ray and the noise was awful. From the moment I put he disc in, the buzz began. Some solution or support?

Seriously thinking of purchasing a LG 4K TV and UP970 Blu-ray but very disappointed with ratings here and on Amazon, problems of no Dolby Vision software/firmware updates????? Problems from many with noisy operations??? Has this been fixed yet?? 4-7-18

Asked by: cobreeco
Hello, the UP970 received the Dolby Vision update a couple of months ago. Less that 1% of the units sold have experienced noise and those seem to have received some sort of shipping/transport damage. ^AC
Answered by: Amber C

I understand about Regional codes &amp; restrictions on playing Blu Rays &amp; DVDs. My question is simple, will the UP970 play 50hz discs? Some models &amp; brands will and others won't. Thanks in adavance.

Asked by: Super Nik
Regrettably, we are not familiar with 50 Hz discs. Movies are shot at 24 frames per second (fps), and although advanced digital TVs support 24 fps and can display movies natively, analog TVs and many digital TVs cannot. As a result, movie material must be converted to either 30 interlaced frames or 60 progressive frames by the DVD player or TV. Since 24 does not divide evenly into 60, four progressive movie frames are converted to five interlaced or 10 progressive frames. The process, known as &quot;3:2 pulldown&quot; or &quot;2:3 pulldown,&quot; cannot create a flawless copy of the original movie because 24 does not divide evenly into 30 or 60. Although new movies on DVD are in the progressive 24 fps format (24p), older movies on videotape, which have previously undergone the telecine process and contain the 3:2 conversion, are sometimes recorded on DVDs. If a DVD player or digital TV supports &quot;cadence correction,&quot; it reverses any 3:2 cadences it finds back to full film frames before it applies any telecine processes. The 1080p or 2160p video output frame rate on the LG 4K Ultra HD Blu-ray Disc&trade; Player with HDR Compatibility, Model # UP970 may be automatically set to either 24 Hz or 60 Hz depending both on the capability and preference of the connected TV and based on the native video frame rate of the content on the BD-ROM disc. There is no option for 50 Hz...^IFV
Answered by: LGJoel

Will the UP970 play 50z discs? (I have some old BBC Region free Bluray programs). A lot of players can't handle 50hz discs. My Philips 7501 does, but I want a player with DolbyVision. Thanks in advance.

Asked by: Super Nik
This unit has a regional code printed on the rear of the unit. This unit can play only BD-ROM or DVD discs labelled same as the rear of the unit or &ldquo;ALL&rdquo;. Should you need assistance, do not hesitate to reconnect with us directly via Twitter @LGUSSupport or Facebook www.Facebook.com/LGSupportUSA ^CP
Answered by: ChrisPSM

Prices, promotions and availability may vary by model, store, and online. Prices subject to change without notice. Quantities are limited. Check with your local retailers for their final price and availability.

Watch the latest movies, sports and documentaries with a home theater, portable projector or 4K Blu-ray player from LG. Whether you love your old DVDs, can't get enough of the hottest Hollywood hits, or want to watch movies outdoors on a big screen under the stars, our home video solutions give you the power – and the technology – you need to do it all. Our collection includes:

LG 4K projectors, DVD and Blu-ray players give you the power to watch what you want, when you want. From classic films to the latest indie flicks, blockbuster movies to the biggest sports on TV, our devices were designed to maximize your home entertainment options and immerse you in all the action. Explore our collection, then browse our newest TVs and audio devices – and find new ways to make life good.