• Prevent children of 5 years or younger from watching a 3D video. It may impair the development of their eyes.

touch or jump at the screen. Adult guidance and supervision is recommended.

• Since the distance between the eyes is narrower for children than in adults, children tend to notice a greater

difference in the images seen by each eye. Therefore, even while watching the same 3D video, children may

have a greater depth perception than adults.

• Young people of 19 years old or younger may respond with sensitivity to the light stimuli of 3D content.

Excessive viewing when fatigued is not recommended.

• Elderly viewers may have a reduced depth perception than younger viewers. Avoid watching video nearer than

distance, you may not be able to see 3D images. You cannot view 3D images when you are lying down.

• You may see left and right images overlapped during projector initialization after it is powered on. It may take

some time for optimization.

look back at the 3D image.

or near windows. If so, it is recommended to block the sun light with a curtain and to dim the lights.

• The 3D glasses must be DLP-LINK (DLP Ready) type. • You may not be able to watch 3D properly if there is an

obstacle between the projector and 3D glasses.

• Install the 3D projector as far as possible from other devices.

• If a future 3D broadcasting format that is not supported by this projector becomes the standard, an additional

device such as a set-top box may be required. 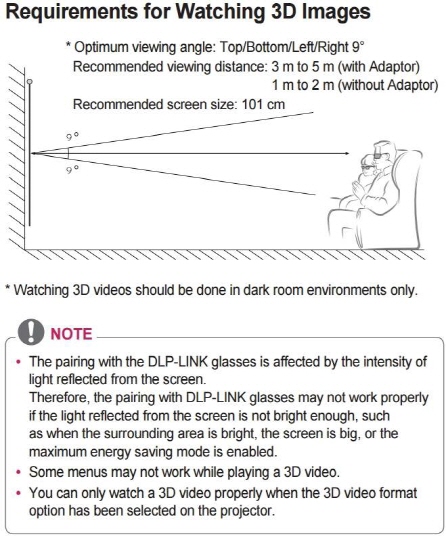