When trying to find the perfect TV for your lifestyle, it’s important to compare different types to find the one that’s the best choice. One popular comparison has been OLED vs. NanoCell TVs in an attempt to find the superior product.

Nanocell and UHD are LED TVs (which are actually LCD TVs that use an LED backlight) get their sleek, compact profiles and good contrast ratios via light-emitting diodes that provide the necessary backlighting instead of CCFLs, but neither backlights nor LCDs are needed for OLED. Instead, OLED uses an organic substance that glows when an electric current is introduced. This revolutionary material reduces the thickness and weight of the TV, creating an ultra-thin, sleek form, superior color reproduction, and individual pixels that switch off for true blacks.


Click the TV type to see the 2019 models under that category with a side by side comparison.

OLED: Organic Light Emitting Diode, an organic substance that glows when it's activated by an electric current. This self-lighting carbon-based material makes up the screen's pixel layer. The reason Oled TV's can get the truest black is because in an OLED TV screen, each pixel is its own independently controlled light source, so there's no need for a back light with all its limitations.

Nanocell: LG's name for quantum dot back light, which is a variation on liquid-crystal displays (LCD) technology. Liquid crystals do not emit light directly, instead using a back-light or reflector to produce images in color

IPS: A screen technology for liquid-crystal displays (LCDs). In-plane switching (IPS) involves arranging and switching the orientation of the molecules of the liquid crystal (LC) layer between the glass substrates. This is done, essentially, parallel to these glass plates. IPS panels display consistent, accurate color from all viewing angles. 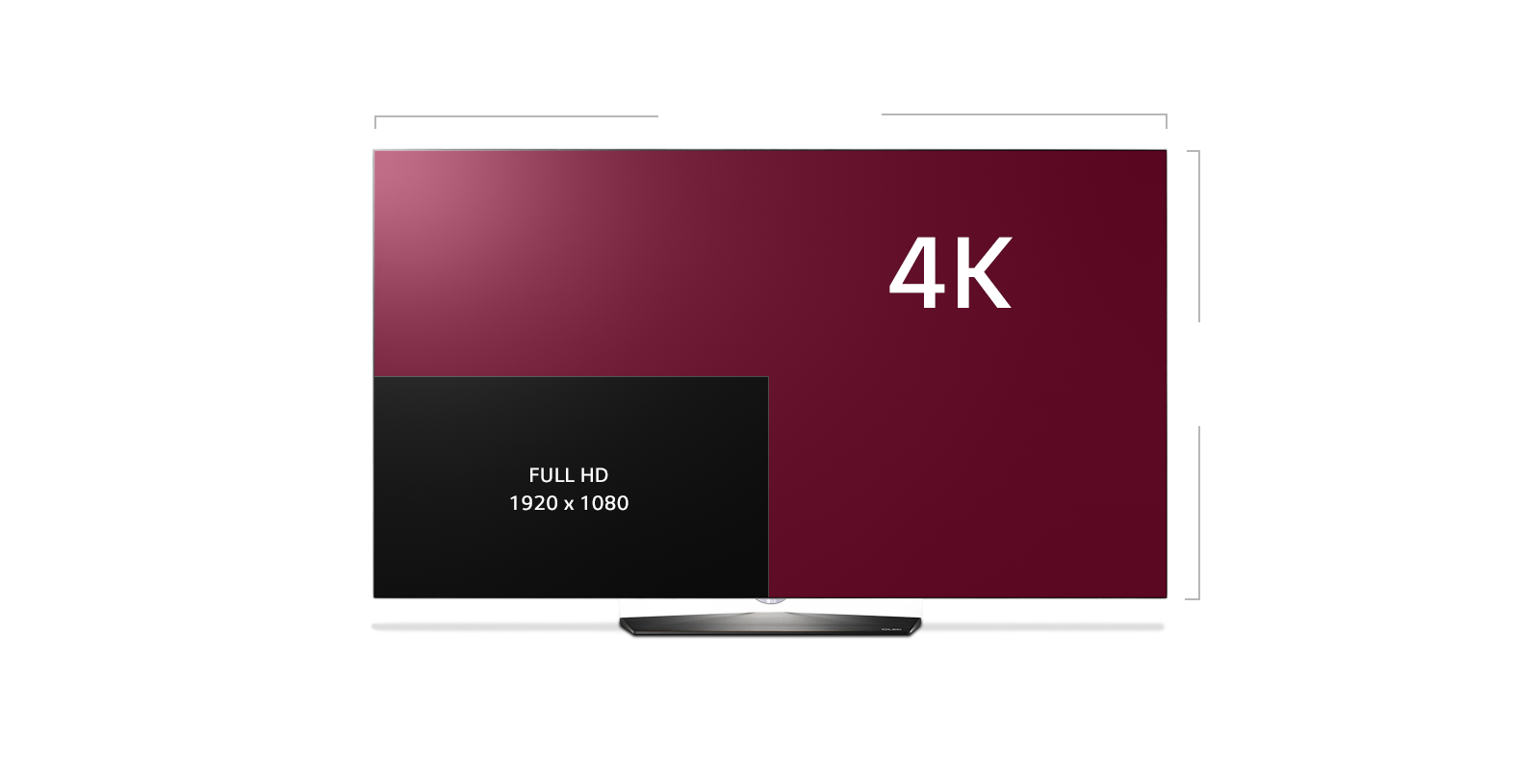 UHD-1: Commonly referred to as as 4K.

UHD-2: Currently there is limited consumer level displays that support that specification, and there isn’t any readily available consumer content to view it on yet.

DCI 4K: It is used by the film and television industry to produce and master high resolution content.

Edge-Lit: When you hear the term Local Dimming, it's usually used in reference to Edge-Lit televisions. In these TVs, the LED lights sit around the perimeter of the screen, with each zone dimming as a group in an attempt to improve contrast. In general, they do a fine job of creating contrast, but the lights are unable to dim individually and they lack the richness and depth of FALD TVs—and depending on the quality of the television you choose, their color and contrast levels may not be evenly distributed.

Direct Back Lit: Today, Direct Back-Lit technology is generally available on older or entry-level televisions. It uses a small amount of LED lights behind the screen, which work to light the picture. However, because all of the contrast depends on just a few lights, dark scenes can end up ALL dark and light scenes look TOO light, which means that contrast is negligible at best and whatever is on the screen won't come close to a true-to-life image. Some very low-end Direct Back Lit TVs offer no local dimming at all.

Full Array: TVs with Full Array Local Dimming technology have multiple zones throughout the display and—unlike TVs that have LEDs around the edges of the panel—these LEDs are instead placed behind the screen, like the Direct Back-lit TVs… but that’s where the similarity ends. Full Array LED backlighting delivers hundreds of different LEDs, resulting in light levels from many separate zones. Thanks to these independently controlled light zones, you see enhanced black levels, better shadow detail and a decreased level of “light bleed”—which can occur when the light is not completely blocked, allowing excess light to "bleed" out around the edges of the panel and creating areas that are too light on a dark background. With light bleeding decreased, you get greater contrast and superior picture quality, while enjoying enriched colors and life-like images for a true home-cinema experience. And while Edge-Lit Dimming improves picture quality to a point, Full Array Local Dimming is the crème de la crème of Local Dimming technology—which has never been more important than in today’s high dynamic range (HDR) TV realm.

In contrast to Full Array, edge lighting results in turning a line of light on and off. Full Array panel Local Dimming can turn on and off only certain parts of the screen, providing clearer contrast. Darker and brighter areas have a more detailed color appearance

The logic circuitry that responds to and processes the basic instructions that drive a computer. The four primary functions of a processor are fetch, decode, execute and writeback.


Deep Learning: A class of machine learning algorithms that use a cascade of multiple layers of nonlinear processing units for feature extraction and transformation. Each successive layer uses the output from the previous layer as input.

Noise reduction: The process of removing noise from a signal, the more steps, the cleaner the signal and the clearer the picture.

Advanced Color Enhancer: Looks at light levels of the colors and uses color curves to dynamically improve the picture quality

Sharpness Enhancer: One of the most accurate ways to detect image edges and sharpen the picture.

Color Look up Tables: The larger the color look up table, the more accurate colors can be, (ex. the difference between "stop sign red" and "fire truck red"

HDR: HDR is short for High Dynamic Range, a new standard for Ultra HD televisions with the potential to vastly improve the viewing experience. Basicaly the contrast between the brightest whites and the darkest blacks.

HFR: The rate at which most films, including even the biggest Hollywood blockbusters, are shot and projected is 25 frames per second (fps). Technically speaking, HFR is anything above 25 fps. And while 25 fps is still the standard, those in the film industry and many people who film sports for broadcast networks think that shooting images at a higher frame rate should become the standard. Not only does it provide a richer visual experience, but it gives content a more "cinematic" quality. And although expert opinions about how many frames per second the human eye can detect vary wildly – from 60 to 1,000 – it's clear that we're capable of seeing images at a much faster rate than 25 frames per second. Last year’s models also supported HFR but only via streaming input.


Dolby Atmos: Now it's pretty much standard in receivers with seven or more channels. This "object-based" format assigns audio "objects" to specific locations in your listening area to correspond to where they'd occur naturally in space. This adds a three-dimensional feel to the two-dimensional images on your screen.

DTS:X: Is flexible object-based surround sound format as with Dolby Atmos, movie soundtracks encoded with DTS:X place sounds where they would naturally occur in space. DTS:X is also interactive. Some DTS:X encoded content lets you tweak dialog levels, so you can hear voices better over background effects.

Virtual DTS:X Which employs Digital Signal Processing (DSP) in an aim to provide the same spatial cues that a traditional DTS:X system could provide, but over a smaller number of speakers, even if you’ve only got two. Basically it upscales a 2.1 format to become surround sound.

ThinQ AI is designed to give products brains so they can predict user needs and adapt different behaviors accordingly.

Products that carry the ThinQ branding will be artificially intelligent, able to communicate with each other and employ LG's own deep learning technology in order to better understand your habits and needs.

LG's AI platform, DeepThinQ, allows connecting with Amazon Alexa, which also has the ability to talk to connected ovens and dishwasher. And many of its other smart products will be able to be controlled by Google Assistant.

The feature ensures that only complete frames are displayed on the TV, without introducing input lag by adding multiple buffers. This reduces screen tearing as the refresh rate changes (depending on graphics load or available processing).

Both the source device and the TV must support variable refresh rate, otherwise, this feature won't be enabled.

The LG TV picture mode must be set to Game Mode to enable VRR.

As of when this article was written, the Xbox One X and Xbox One S currently supports VRR.

The Oled and Nano cell TV's come with an A9 Gen 2 Processor.

The processor allows LG’s Deep Learning technology to intuitively recognizes images and allows the processor to know what to do to make the image better and more enjoyable.

AI Technology powered by Deep Learning analyzes incoming content by input and resolution. It then makes chooses which processes are necessary for maximum picture quality.

Taking information from all inputs

With Deep Learning technology support, the LG TV can reference a database to determine how to display best picture quality from any source or from any resolution.

LG TVs detect nearby light and are able to pinpoint “specific” areas on the screen that require higher brightness. This ensures optimal viewing regardless of the environment.

Automatically adjust brightness according to environment

LG TVs with alpha gen 2 processors can recognize lighting changes and automatically adjust sections of the picture according to tone mapping to preserve the director’s intention, improving contrast in detail in bright conditions.

The deep learning algorithm enables up-scaling of audio in a more natural and accurate way by learning the differences in sound characteristics and how they are uniquely positioned in both stereo and surround.

LG TVs with AI Sound can recognize the elements of the original 2.0 source and optimize it by up-mixing it to virtual 5.1ch surround sound.

Please try again.
RETURN TO RESULTS
is copied.
Select Ctrl+V to paste
Transfer complete.
Thank your for your feedback.

Because life waits for no one, at LG USA we create consumer electronics, appliances and mobile devices that are designed to help you connect with those who matter most. Whether that means cooking a nutritious, delicious meal for your family, staying connected on-the-go, sharing your favorite photos, watching a movie with your kids or creating a clean, comfortable place to celebrate the moments that matter, we'll be there for you every step of the way.

Explore our complete collection of LG electronics, mobile devices, appliances and home entertainment solutions -- and find everything you need to connes and family, no matter where they are.

ct with your friend