Whereas movies were being projected onto a large screen one picture at the time, 24 images per second,

the same notion would not work getting that feed into individual households. What had been working then was

generated luminosity between white to black and the entire intricate grey scale in-between, transmitting it

over-the-air, receiving it and displaying it on the TV monitor. In a similar fashion one could relate understanding

than 6MHz per channel/station regardless radio or television.

NOTE: 6MHz signifies 6 Mega Hertz. One hertz is a unit of cycle per second. 6MHz means there can be up to

given that movies got away with 24. Each images required be scanned 525 lines top to bottom, 45 of which

kept invisible hence the 480 standard. Each scan line would consist of 370 pixels, 40 of which invisible. 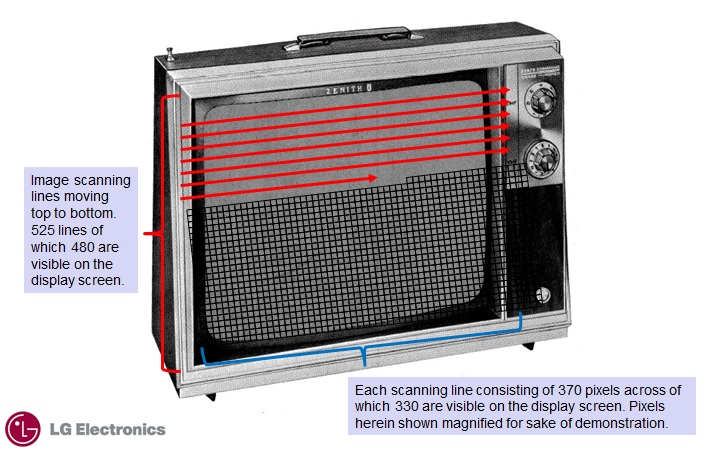 them to turn away or turn off the monitor. There was no way that prototype would make it into any American

household without being trashed in seconds flat.

Going back to the improvement methods made in film, engineer proceeded to increase the number of images

per second until eliminating flickering. 40 images per second did the trick.

the neighborhood yet distant to test broadcast reception. No matter how much they tried the experiment bombed.

Realizing they were exceeding allowable bandwidth and cognizant they couldn’t return to 30 images per second,

a clever engineer proposed sending half the image at the time. Not top, bottom, top, bottom and so forth but odd

materializing further to watching too much television, it was because although eyes were fooled in seeing

motion, the brains however had to strain and work overtime recreating the missing information.

No time to chat?
Send LG Support your inquiry.