SYDNEY, 19th February 2015 – To commemorate the hosting of the International Cricket Council (ICC) Cricket World Cup 2015 and celebrate the passion of cricket fans from around the world, LG Electronics (LG) has globally unveiled the ‘LG 100 Greatest Fans Benches’. 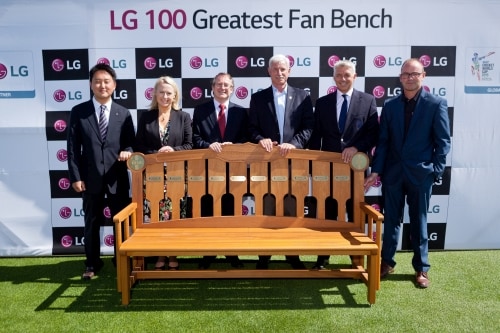 Ten benches have been placed around the oval to mark the culmination of the LG 100 Greatest Fans campaign, which offered a unique opportunity for cricket fans to show the world their passion and dedication to the game.

In the weeks before the ICC Cricket World Cup, fans uploaded photos, videos, recordings, and messages on the official website: www.lg100greatestfans.com, earning points by sharing their submission through social media and having others vote.

The competition closed on 6th February and the 100 best entries have their names engraved on the benches to be placed at Hagley Oval. Out of these winners the top 14 entries, one per country involved in the tournament, will win two tickets, flights and accommodation to attend the ICC Cricket World Cup Final in Melbourne on Sunday 29th March.

The LG 100 Greatest Fans also awarded Pakistan – the country with the most points collated by all entrants - with USD50,000 to contribute to their Youth Cricket program.

The benches were designed as a tribute to the sport and to the ICC Cricket World Cup 2015. They have been designed with cricket tributes running throughout.

· The armrests: fashioned after two wickets, each comprised three stumps and two bails

· Back support: spindles in the shape of cricket bats and on the bat face are the plates engraved with the names of the world’s most passionate cricket fans

· Two emblems: sitting proudly on the shoulders of the bench are two engraved emblems, one sporting the official trademark of the ICC Cricket World Cup 2015 and the other denoting LG’s contribution

WHAT LG AND THE PARTNERS HAD TO SAY

Participating in the ceremony was cricket legend, Sir Richard John Hadlee. To mark the occasion and commemorate his distinguished career, Sir Hadlee was made an honorary member of LG’s 100 Greatest Fans, he commented: “It is only on the shoulders of our fans that cricketers are able to rise to such heights.”

Phil Clearwater, Official Council representative for the ICC Cricket World Cup 2015 New Zealand said, “benches which represent passion and support from all around the world for this great sport will have a great home here. Christchurch City Council is delighted to accept this generous gift on behalf of the city from LG Electronics. Having them here in Hagley Oval will be a fitting legacy to the ICC Cricket World Cup and LG’s commitment to cricket and the community of Christchurch”

Wayne Park, Executive Vice President and Head of LG Electronics Global Sales and Marketing Company said: “We are honored to donate a series of benches, embedded with the passion of cricket fans from all over the world, to commemorate ICC Cricket World Cup.”

Previous
SCORE BIG THIS SUMMER WITH LG AND DAVID WARNER