SYDNEY, 29 April, 2015— To showcase the huge capacity of the LG 15kg washer, GPY&R Sydney have partnered with oOh!media to create the ‘Done in One’ billboard.

The items, which were all washed in a single load in the machine, were then assembled on the billboard at oOh’s fabrication warehouse to create a powerful product demonstration. Passers-by were directed to an online destination where they could view the same 71 items being ‘done in one’.

Lambro Skropidis, General Manager of Marketing at LG Electronics, said, “The amount of laundry that can be washed at one time in this machine is really impressive, so we wanted to bring this to life.

“We aimed to create a simple, impactful product demonstration that was sure to resonate with busy Aussie mums for whom laundry can be a part of their daily routine.”

For oOh! it was a chance to showcase their special build capabilities. Brendon Cook, CEO of oOh! said – “At oOh! we’re particularly passionate about creative on outdoor billboards and love working closely with agencies to bring ideas to life.

Collaborating with GPY&R for LG’s “Done in One” at Sydney Airport, provided a great opportunity for us to work together to create a high impact canvas that allowed LG Electronics to take their engaging concept to the masses.”

6 Motion™ technology, which is unique to LG, you’ll get an outstanding wash combined with advanced clothing care. The drum moves in a range of unique customised motions that mimic hand washing so the washing cycle is not just dictated by speed and temperature, but the actual movements of the drum.

VIEW THE MAKING OF VIDEO

VIEW THE DONE IN ONE BILLBOARD 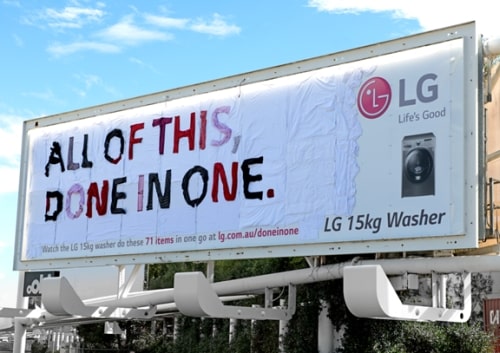 GPY&R is one of Australia’s leading marketing communications companies, founded in 1934 as George Patterson and later merged with Y&R in 2005. It is part of Y&R Group, comprising GPY&R, Y&R NZ, VML Australia, IdeaWorks, and Blaze.

Y&R Grouphas a vast network of global resources, with 186 offices in over 90 countries around the world.

Previous
LG UNVEILS THE G4, ITS MOST AMBITIOUS SMARTPHONE YET