SYDNEY, 26 October 2015 – LG Electronics (LG) is pleased to announce the arrival of the Nexus 5X in Australia, in partnership with Google. This is the latest product that the tech giants have collaborated on and for LG it follows on from the successful Nexus 5 released in late 2013. As expected, it comes packed with new hardware and the freshest version of Google’s Android operating system. A WEALTH OF EXPERIENCE AND KNOWLEDGE

The Nexus 5 of 2013 was widely acknowledged at the time as a standout product with reviewers praising the beauty and performance of the hardware, including the 2GB of RAM and 1080p screen.

Since that time LG has focused on developing its feature rich flagship smartphones, releasing the LG G3 and LG G4 which have been widely acclaimed for their design and functionality.

LG is now continuing the successful collaboration with Google to bring its manufacturing experience to the creation of yet another stand out Nexus handset.

Leveraging the experience and technology gains from the last 2 years LG has packed the Nexus 5X with some fantastic technology. Consumers buying the Nexus 5X will be benefiting from features found in flagship handsets at the traditionally market leading price that the Nexus range has made its hallmark.

It’s the stuff Android-based dreams are made of.

LG and Google is a partnership that has stood the test of time and continues to flourish. Not only has LG been a long-standing partner and supporter of the Android ecosystem but it has also been the manufacturing partner of Google on a number of innovative devices.

One of the highlights of this collaboration is the LG G Watch. The first LG smartwatch was also the first ever device to show off the Google Android Wear OS, which is now a staple amongst Australia’s most popular smartwatches, including the G Watch R and the LG Watch Urbane

Gino Casha, General Manager of mobile communications at LG Australia said, “LG delights in working with Google. As brands we share the common value of creating products that offer a phenomenal user experience for our consumers. As companies we have skills and rich histories that truly complement each other.”

Casha continued, “We are excited about our latest Nexus handset and look forward to the continued close working relationship.”

WHEN AND WHERE YOU WILL GET IT

The Nexus 5X will be available in Australia both online and in-store from Tuesday 3rd November 2015.

Adding to the great news is that the Nexus 5X is going to be available to the Australian consumer in a variety of options. It will come in three colours – Carbon Black, Ice Blue and Quartz White*

Two memory size options will be available**: 16GB and 32GB.

The in-store options are as follows: 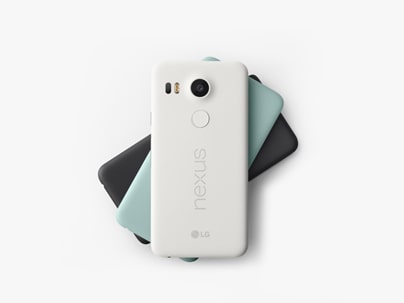 JB HiFi will be offering a Bonus $50.00 trade-in during November and December when a customer trades in any working phone for a new Nexus 5X smartphone.

** Colour and memory size variants will vary by retailer

LG Electronics Mobile Communications Company is an innovator and trend leader in the global mobile communications industry. LG is driving the evolution of mobile forward with its highly competitive core technologies in the areas of display, battery and camera optics and strategic partnerships with noted industry leaders. LG’s consumer-centric products — including the flagship premium LG G Series models — incorporate unique, ergonomic designs and intuitive UX features that enhance the user experience. The company remains committed to leading consumers into the era of convergence, maximizing inter-device connectivity between smartphones, tablets and a wide range of home and portable electronics products. For more information, please visit www.LG.com.